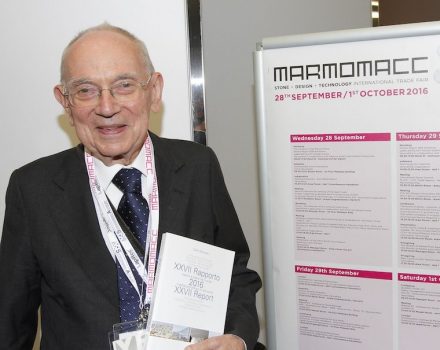 Answers to many questions are provided in Dr. Carlo Montani’s Statistical Yearbook „XXVIII Report Marble and Stones in the World 2017“

Statistics are of little use if they serve only as a proof of success. So, let us quickly present facts and figures, in the „XXVIII Report Marble and Stones in the World 2017“, in which Dr. Carlo Montani relates production of the natural stone branch:

* in 2016 the worldwide quarrying brought forth 296.4 million t of natural stone (2015: 286.2 million t). This is a brute mass including waste;
* the international export amounted to 53,545 million t (2015: 53,023 million t);
* Dr. Montani expects growth in the branch amounting to 13% as realistically attainable. He backs this number up with the worldwide building boom coupled with the population growth and people’s general interest in natural materials.

Ranking of the top players, too, is quickly summed up: the top five are unchanged and their slice of the world pie is the same, whereby China has slipped to growth levels below 10%. India, currently ranking second, could overtake China in the foreseeable future, according to reserved speculation by Montani. 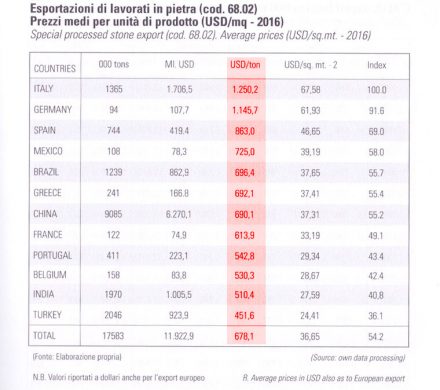 Let us concentrate on a particular aspect in the long list of statistical tables, i.e. turnover in stone goods (here: processed and finished stones) by export companies: Italy is right up front with an average 1,250 US-$/t as compared to the closing position taken by Turkey and an average 450 US-$/t.

This ranking has no meaning relative to the world market countries: Germany taking second place, sold its wares at premium prices abroad but by volume it was a dwarf.
The titillating question is, how does Italy (and Germany for that matter) manage to sell their wares at such high prices.

It would be arrogant to assume that the products meet higher standards than elsewhere. Let us turn to Montani’s list.

One aspect is that Italy practically corners the market for Luxury goods where high prices are attained as a matter of course. But that’s not all.

The answer becomes obvious when looking toward Germany as a diminutive partner in turnover. „Made in Germany“ sells, and drives prices sky high. In the case of German, the stone branch is the beneficiary and tags along to profit of Germany’s good name; „Made in Italy“ stands for culture, heritage and lifestyle where stone products are concerned.

This aspect, i.e. correlating emotional added value with natural stone and bring it to market, crops up repeatedly in Montani’s analysis of the markets. „Marbles and stones are suitable for expressing aesthetic values and functionality together, higher than others, that belong to a sphere of culture as well as to that of the economy.”

Some other aspects in the bookin digest form:
* there is a worldwide trend toward using local material. The reason, according to Montani, is that after substantial investment in technology for a protracted time span, professional manufacturing is almost universally available;
* for the first time, there were more value-added products sold than raw materials;
* stone waste amounts to nearly 50% of the raw material (thus 151.4 million t of waste are contained in the 296.4 million t quarried and sold; a mere 85.6 million t of stone products were actually manufactured). Montani calls for careful and conservative use of resources and more use of waste material;
* granite and siliceous stones attained some 40% of the world market for the first time.
* with a view to import statistics, a closer look at the statistics of small players such as Pakistan, Malaysia, Thailand or Indonesia. Montani mentions Kyrgyzstan in particular;
* unusually high growth rates in the private building sector were achieved between 2012 and 2016 in Australia and South Korea.

The book „XXVIII Rapporto marmo e pietre nel mundo 2017 / XXVIII Report Marble and Stones in the World 2017“ is published bilangual in Italian and English and comprises some 250 pages. It is published by Aldus Casa di Edizione, Carrara.

Unfortunately – despite request – the publisher’s webpage does not inform how to buy the new edition of the book.