Premios Macael, the Iberian Macael Marble distinction was awarded for the 31st time 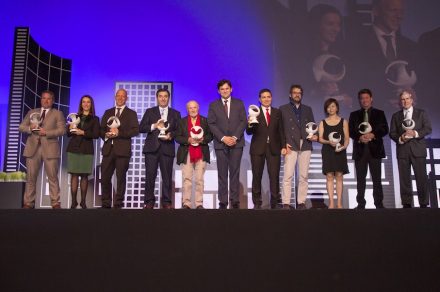 The Premios Macael, the Iberian Macael Marble prizes of distinction were awarded for the 31st time. The honor is donated by the Association of Entrepreneurs of Andalusia (Asociación de Empresarios del Marmól de Andalucía AEMA) representing the branch. Its aim is to provide proof of distinction, quality and performance of the stone branch and its products on a worldwide basis and make a name for itself at public events.

The awards are accompanied by other events: in June 2017, some companies had presented themselves at the New York MET and many guests now travelled directly on to Macael to get a firsthand impression of quarries and production in Andalusia.

Some 500 guests attended the ceremony, many of which were participants of the International Meeting of the Stone (Encuentro Internacional de la Piedra) in Macael, which took place simultaneously. The invited guests came from Kazakhstan, the United Arab Emirates, the United Kingdom and the USA, having first visited 18 stone-producing companies.

The Royal Couple, though invited to the Gala, was unable to attend due to a conflict in schedule but sent their best wishes, according to a press-release by the stone organization.

AEMA-President, Antonio Sánchez, called for more support for Macael-Marble from politics. He brought up the memory of the third Strategic Plan for the branch, which had been agreed in cooperation with Andalusian’s regional government with great verve at the time but efforts had petered out almost entirely.

The awards are granted in various categories. We report on the award-winning projects and persons. The descriptions were provided by the organizers.

Category Design: Villa Ricotta, Marbella, Málaga.
The Jury grants the Design Award to VILLA RICOTTA, a private residence whose promoter is Mr. Joe Ricotta, located in Marbella, Málaga, executed mainly with the material ,Piedra Paloma’. The façade under the direction of the Architect Mr. Jesús del Valle follows a Renaissance order both in columns and coffered ceilings. The interiors integrate different materials and colors using the waterjet technology for ceilings and valances in lobbies and bathrooms. 4,600 square meters of 2 and 3 centimeter squares and pavements have been used, and 390 cubic meters of solid sculptured material for columns, bases, cornices and other decorative elements. It emphasizes the majesty of its 18 columns of more than 7 meters in height, the 6-meter long stems made in one piece, with their corresponding capitals, and the fountain of the main entrance, which integrates a sculptural group of three horses modeled in 3D. 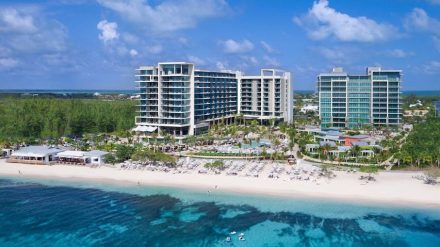 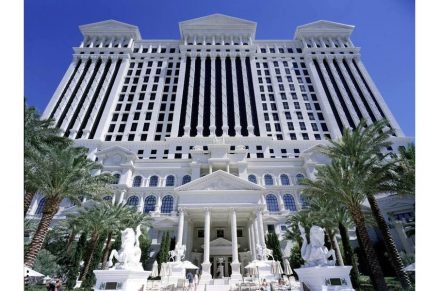 Category International Award for North America: Caesars Palace Hotel, Las Vegas, USA.
The Jury grants the International Award for North America to the CAESARS PALACE HOTEL, Las Vegas, Nevada, United States, property of the Caesars Entertainment, famed hotel for innumerable movies and shows, built in 1966. In its last remodeling this summer of 2017, 72,000 square meters of Silestone in white Zeus has been used in the bathrooms of its luxurious rooms. The result is a perfect combination of this material with the decoration of the rest of the space, highlighting its intensity and elegance. 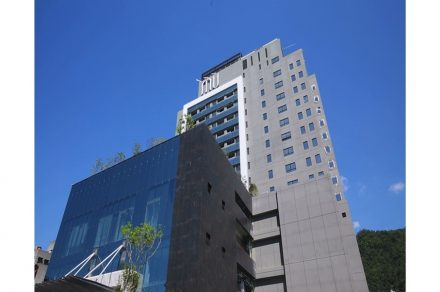 Category International Award for Asia: Le Meridan Hotel, Yilan, Taiwan.
The Jury grants the International Award for Asia to LE MERIDIAN HOTEL, located in Yilan County, Taiwan, owned by Trans Globe Company, which has chosen the ultra compact surface Dekton Aura and Dekton Kelya for the facade cladding, using a total of 3,800 square meters, perfectly fitting these materials with the aesthetics and design of the Hotel. The natural character of Dekton (produced by Cosentino), its advanced technology, its easy maintenance and its sustainable condition, were key elements for its choice. 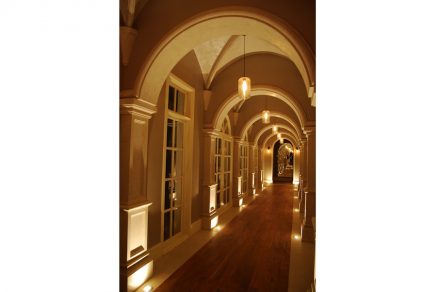 Category International Award for Africa: Private House in Kenya.
The Jury grants the International awards for Africa to the PARTICULAR HOUSE IN KENYA located in Nairobi, whose architect is ÍÑIGO TORRENS, used various limestones and travertines for its construction. The building is inspired by the Château style, based on the French Renaissance architecture of the monumental country houses, blending both the exterior and the interior with the colonial style of the area. Their discreet aristocratic lines stand out and its facade concentrates numerous and sober windows dressings. In the interior impresses the gallery of arches with vaults and the central fountain of the patio. 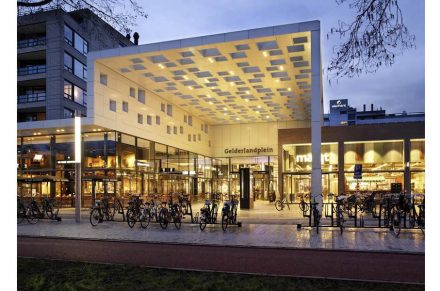 Category International Award Europe: Estudio de Arquitectura Rijnboutt.
The Jury grants the International Award for Europe to the Rijnboutt Architecture Study for the prescription of Sierra Elvira marble in the GELDERLANDPLEINN shopping malls, in the financial center of Amsterdam and DE BARONES, in the historic center of Breda (Netherlands), where more than 11,000 m2 in pavements, claddings, curves and curved staircases, being able to emphasize a contemporary aesthetic, as well as functional, in all the passable zones of both commercial centers. 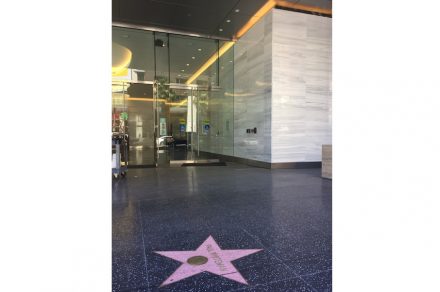 Category ,Blanco Macael’ Award: Vine Street Building, Los Angeles, USA.
The Jury grants the Award for the ‘Blanco Macael’ marble work to the VINE STREET BUILDING, which is located in Los Angeles, USA, in the so-called Hollywood stars street, for the use of our ‘Blanco Macael’ Marble (White Macael) in both the exterior facade as in its interiors, using pieces of large dimensions of 3 cm. of thickness, emphasizing the stone the elegance of the building and contributing to achieve a select environment, besides serving as a showcase in this important street.

Category National Award: Complejo Hipotels, Palma de Mallorca.
The Jury grants the National Award to the HIPOTELS COMPLEX, located in Playa de Palma, Palma de Mallorca, consisting of two hotels, category 4 and 5 stars, connected to each other by a convention center, being the HOTEL SAID, the Architecture MORRO & SERRA and the Designer GUILLERMO CONTÉ BARCELÓ the promoters. In its construction, more than 5,000 square meters of ,Blanco Macae’’ marble (White Macael), more than 72,000 square meters of Dekton and more than 1,600 square meters of Silestone have been used. The result achieved is an impressive aesthetics and careful design in all its elements. 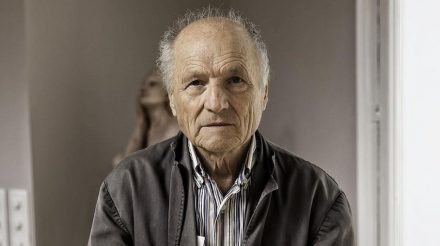 Category Award to the Person: Antonio López García.
The Jury grants the Award to the Person to Mr. ANTONIO LÓPEZ GARCÍA, prestigious painter and sculptor, icon of contemporary Spanish realism, involved for years in the cultural activity of the Macael Region through the Ibanez-Cosentino Art Foundation, author of the project known as ,Mujer del Almanzora’ (Woman of the Almanzora), a large sculpture in the manner of the colossi of antiquity, 8 meters high, representing a woman’s head that emerges from the earth, made with ,Blanco Macael’ Marble (White Macael), visitable inside, for what have used eighty-six marble blocks with which more than a hundred cubic meters of this prestigious stone were made using the most advanced technology of the moment. 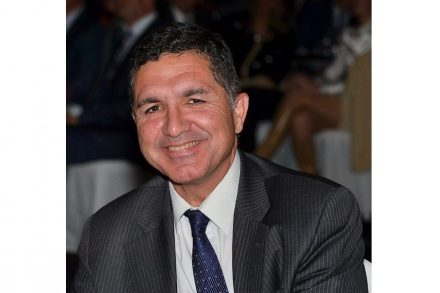 Category Communication Award: Gaspar Llanes Díaz-Salazar.
The Jury grants the Communication Award to Mr. GASPAR LLANES DÍAZ-SALAZAR, General Secretary of Economy of the Ministry of Economy and Knowledge of the Regional Government of Andalusia, and President of the Agency EXTENDA, promoter and collaborator in the most important international event for promotion of the ,Macael Brand’, which took place last June in the Metropolitan Museum of Art of New York, where the Courtyard of Honor of the Castle of the Vélez, made with ,Blanco Macael’ marble, is. It was attended by a hundred and twenty professionals from prestigious US Architecture and Design Studies who were presented the qualities of Macael’s marble, their durability over the years and the professionalism and creativity that the companies have acquired over time.