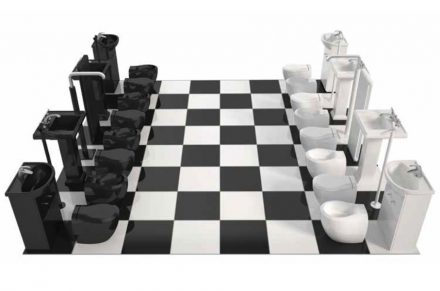 „Scacco Bagno” (Chess Bath) is the title of Cersaie fair’s poster image in this year. It was created by students from the Art Academy in Brera, department for Artistic Company Communication. Cersaie is a prominent fair for ceramic tile and bathroom furnishing. It will be held in Bologna from September 24th to 28th.
https://www.cersaie.it/en/s_immagine.php

Curling is an Olympic kind of sport where granite plays a major role (1, 2).

Expo Revestir in São Paulo has given a new structure to its large lecture program: during March 13 – 14, 2018 is held „Business Days“, during March 15 – 16 „Creative Days“ (for Architects and Interior Designers). Find the link to the fair in our Calendar.

Italy goes Pakistan. A Memorandum of intent has been signed between Italian Confindustria Marmomacchine and Pakistan Stone Development Company (Pasdec). Pasdec is a public institution mandated to uplift the country’s marble and granite sector (1, 2).

Laser scans revealed a Maya „Megalopolis” hidden under the rainforest in Guatemala.

„Stone Age“ is the name PolyOne has given their 2019 color trend.

After 3 editions of MS Marmomacc + Projex Africa fair, Italian Veronafiere tries now a business meeting called „Marmomac Samoter Egypt“ from February 18 – 19, 2018 in Cairo, Egypt. Participants are exclusively Italian and Egyptian firms. It is a „Forum for the Construction Industry“ and consists of one day of seminars in a hotel and one day of field visits, according to the webpage. 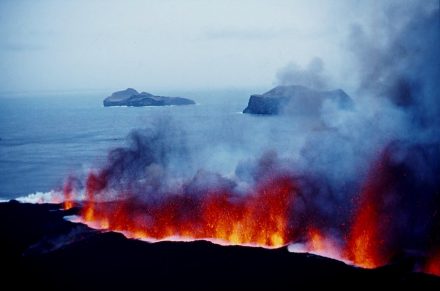 Iceland has a volcano museum, dedicated in part to the 1973 volcanic eruption of Vestmannaeyjar Island. On the islands exists an interlocked system of fire-emitting mountains. 2010 saw the eruption of Eyjafjallajökull prompting the interruption of air travel on the northern hemisphere.

The Neomine project analyses Neolithic stone quarrying and flint mining in Britain and North West Europe over the period c.5300–2000 BC. A topic is also the consumption of these products. Another question is whether people in prehistoric societies had ,economic’ motivations and what those might have been.

„After all, porcelain tile can’t fully capture the essence of natural stone“ is the clue on a stone company’s webpage where the pros and cons of real marble versus ceramic copies are discussed.

Volcanic rocks, when pulverized into fine ash, can be used as a sustainable additive in concrete structures engineers from the Massachusetts Institute of Technology working with scientists in Kuwait have found out.

Uzbekistan government has launched the „Samarkand City“ project to increase tourism to the city registered in the Unesco World Heritage list. Investments in hotels and infrastructure are planned. Nearly 10 million US-$ will be spent through 2019 to double the numbers of visitors by 2021.