SNROC of France has reelected Sylvain Laval as president 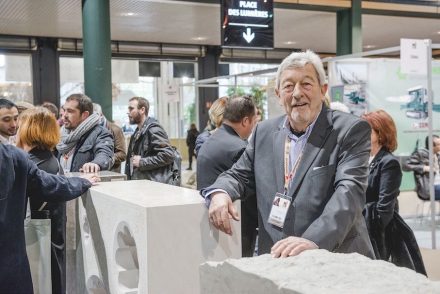 At the Rocalia Trade Fair France in December 2017 SNROC (Syndicat National des Industries de Roches Ornementales et de Construction) elected Sylvain Laval as its new President. Pierre Brousse had resigned after but a short period in office. Laval was SNROC’s President from 1997 to 2013 and the director of Carrières du Bassin Parisien. In its February edition, Pierre Actual interviewed Laval on his plans in his current term of office.

Pierre Actual: Pooling and mobilizing forces of the Trade Organization requires a concerted plan. What would yours entail?

Sylvain Laval: I have a plan of action in all five fields which I want to implement. The most important for the companies under our auspices are: occupational and health safety, ecology, training, and advertisement for our products in the closed-loop economy.

Pierre Actual: Could you elaborate and name details?

Sylvain Laval: I intend to enter an agreement with the UNPG (Union Nationale des Producteurs de Granulats) allowing us to profit from the experience in occupational safety, e.g. the Passport Securité (safety passport) or Système de Management Sécurité (system of security management). I want to create a commission for health and safety in SNROC.

Pierre Actual: Paramount importance for the branch is access to stone. How can it be secured?

Sylvain Laval: Access to natural resources, indeed, touches a nerve in our branch. Today ecology, sustainability and biodiversity are of central importance. UNICEM (Union Nationale des Industries de Carrières et Matériaux de Construction) has drafted an environmental carta in cooperation with working groups in dedicated companies. We should participate and profit of their resources.

Pierre Actual: What new means of job qualification are planned?

Sylvain Laval: In the third trimester of this year SNROC will present the CQP-Qualification for machine and CNC operators. This will give us a solid and reliable means to further education for our co-workers, and we will gain access to financial subsidies. The commission for further education will confer on details and invite interested parties.

Pierre Actual: How can the stone branch improve presentation of its products in public?

Sylvain Laval: in 2017 SNROC introduced the label „Building, restoration, decoration with heritage natural stone“. The label can be downloaded free of charge from the website. This year’s focus will be on Trademark and protected designation of origin, as demonstrated by the forerunner Granit Breton. We must make the experience and lessons learned available to others.

Facts and figures on the French Natural Stone branch 2016 (French)