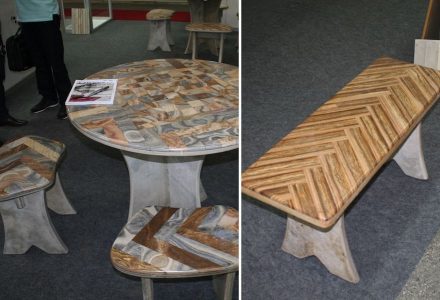 A table in Pedra Cairi Limestone and matching benches were on exhibit at the Fortaleza Brazil Stone Fair (April 18th to 20th, 2018) in Brazil. It is now also available in a thin-stone-version, produced by the young Coopedra (Cooperativa dos Produtores de Pedra Cairi). One of its member is Formpedras Company.

British natural stone manufacturer Lapicida has a collection called „Reclaimed“, where natural stone tiles from defunct buildings are worked over and remarketed. Now there is a variety in ceramics called „Vilasse“.

„Aladin Carpet“ is the name given to China-based Diystone Company’s new floor covering made of polished pebbles.

Carved inside a rock face that rise like a gigantic wall, Taş Mescit (Stone Mosque) is located in the Taşkale village, in south-central Turkey’s Karaman.

A pre-historic rock art site discovered in the vast expanse of limestone blocks on the eastern banks of Naguleru near Dachepalli in India has thrown light on the Neolithic civilization that flourished in Guntur during 1500-2000 BC, The Hindu reports.

„Granite“ is the name of small community in Colorado’s Chaffee County founded in 1867. It was once a gold prospectors’ town. Despite the name, natural stone is not one of its marketed resources (1, 2).

Video of the Month: „Introverso“ is the name of a wash basin by Antonio Lupi Company, designed by Paolo Ulian. A video demonstrates how the basin can be played to every taste (1, 2).