CNN: „Are architects turning their backs on glass skyscrapers?” 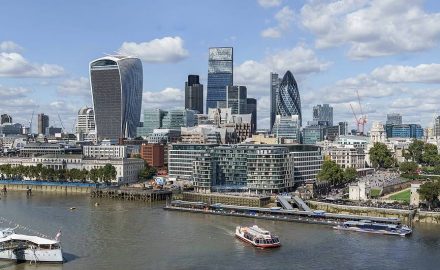 Skyscrapers with glass façades from ground floor to penthouse are being viewed with skepticism and discussed controversially by architects. The critique is not only due to their monotonous appearance but also reflects the poor ecological footprint and its effect on the ecosystem. These are the central statements of a Style-Webpage on CNN.

Author David Holland quotes British architect Ken Suttleworth, who designed „The Gherkin” for Foster and Partners: „That’s in a way, a manifesto for us as architects: to try and make buildings more energy-efficient.“

Other critical voices mock „the cold and uninviting“ atmosphere which glass-clad towers lend their surroundings.
The uninspired uniformity of glass epidermis, devoid of ornaments, which has been the order of the day since the 1970’s. „(They) are intended to enrich their owners and tenants, but not necessarily the lives of … those of us who navigate the spaces between the buildings“.

However, the intent is not to ban glass from skyscraper-façades altogether, architects emphasize. But with a view toward energy consumption, other materials „such as metal or granite“ should be considered as well in combination with glass. The lower floors, e.g., where little sunlight reaches the building’s interior, and where there is no view to speak of, could profit from other building materials.

A representative of the Organization Glass for Europe was also interviewed. He points out that glass is now available with integrated solar cells and challenges architects to develop new façade designs in cooperation with the branch.

Facts and figures on natural stone vs. glass were presented by the German Natural Building Stone Trade Organization (Deutsche Naturwerkstein-Verband, DNV) in its Sustainability Study. In it the Life-Cycle-Assessment for both materials were compared.

Energy for production, depletion of land, water and air were considered for the life cycle of the material.
The study considered a surface of 1 m² back ventilated natural stone façade and 1 m² glass front over a period of 100 years.

In short the key results:
* „A natural stone façade has a significantly better ecological footprint;
* Glass façades require three times as much primary energy;
* The environmental impact of glass façades is significantly higher.“

The study has been translated into several languages by pertinent natural stone trade organizations around the globe.

It can be ordered in English or German on the website of the Deutscher Naturwerkstein-Verband (DNV) for a nominal fee of 16 €.

CNN: „Are architects turning their backs on glass skyscrapers?“