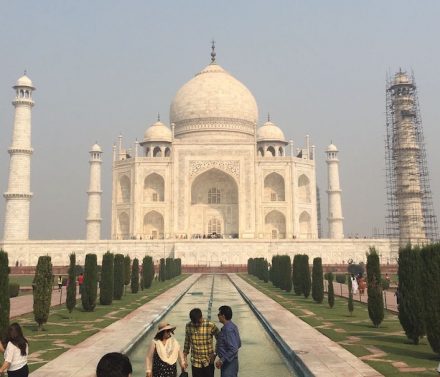 India’s Supreme Court has given the national government the instruction to seek new help to solve the problem of Taj Mahal’s façade to stop the process of discoloration. The source for this help might come from abroad or from inside the country.

Local media cite the judges’ reproaches to the government: „Even if you have the expertise (to solve the problem), you are not utilizing it. Or perhaps you don’t care.“

The problems with the once shiny ivory white marble of the Unesco World Heritage are not new. Over three decades, lawyer MC Mehta had worked through the court arguing that industry pollution was damaging the marble’s color. In 1996 he won the case and many of the firms in the immediate surroundings had to be removed or closed down.

But things did not become better. Now the Supreme Court has examined photos submitted by environmentalists showing that the next to the yellowish tone large areas turning of brown and green are appearing.

Experts suppose that this is a consequence of continuing environmental pollution, now of the waters of the Yamuna River behind the building. It is said that insects in extreme numbers are breading in its swampy waters. International media report that the insects leave on the stone a green poo.

Since long, the building’s stone has been suffering from fungal attacks. As nowadays more than 70,000 people visit the monument every day, their breath gives the fungi ideal circumstances for live. The damages are worst in the inner chamber where the original graves of builder Shah Jahan and his 3rd wife Mumtaz Mahal lie.

In March, the organization overseeing the site had implemented a time limit on all visitors to prevent overcrowding.

Already since 2015, local authorities were trying to treat the marble with so-called Fuller’s earth. That is a clay material that has the capability to decolorize substances without chemical treatment. It is often used in the food or the textile industry. Since then parts of the monument have been under scaffolding. The ongoing cleanup operation will last until the end of the year.

Another Supreme Court hearing has been set for 9 May.