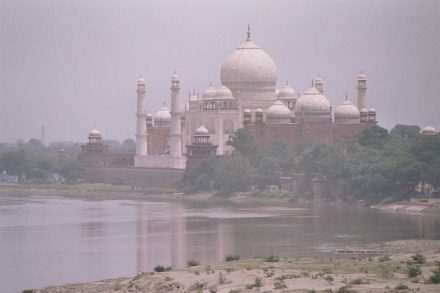 India’s Taj Mahal will undergo cleaning of the marble facades in 2017 meaning that the beautiful view of the Unesco World Heritage site will be hidden under scaffoldings for some months, the Archaelogical Survey of India (ASI) announced early October 2016. Due to extreme air pollution in the area, the originally shiny ivory white stone had acquired a yellow tinge.

A „mud therapy“ will be used to remove the stains from the stone, the press reports: „Additives-laced Multani Mitti (Fuller’s earth)“ will be applied, according to Hindustan Times, „this anti-corroding and non-abrasive technique is more scientific as well as detailed than the ones the government agency employed in the past quarter century to clean parts of the Taj wall — in 1994, 2001 and 2008“.

Fuller’s earth is a clay material that has the capability to decolorize other substances without chemical treatment. It is often used in the food or the textile industry.

Such „mud packs” have already been in use around the side walls and towers of the Taj Mahal since last year. They were used e.g. on the back wall of the monument were green-tinged patches had appeared. That side stands on the banks of the heavily polluted Yamuna river.

In 2017 is planned to touch the main central dome. Before, technical studies have to be to find out how much scaffolding load the structure can bear.

As Times of India reports, the cleaning of the Taj will be carried out in five phases: „ASI said it will complete the work on four minarets by June next year (2017), while scientific treatment and cleaning of interiors of the main mausoleum up to human height will be completed by January. The mud pack therapy of facades — including arches — will begin in April next year and will be completed by March 2018.“

Planned are also changes in entry and exit points and barricades so that visitors „don’t touch walls or spit in the interiors”, Times of India reports. Another proposal is to put glass shields on the ornate marble works and inlays inside the mausoleum.

The Taj Mahal is India’s most famous touristic site. It is a monument of love built by Mughal emperor Shah Jahan as a tomb for his favorite wife Mumtaz Mahal. She was a Persian princess and died giving birth in 1631.