The Berlin Philharmonic will give a concert during the Days of the Open Construction Site at the Berlin Humboldtforum on August 25 and 26, 2018 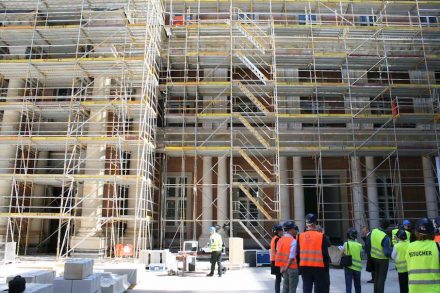 An afternoon concert of the Berlin Philharmonic will be the highlight of this year’s Days of the Open Construction Site in the nearly finished Berlin city palace. It will take place on August 24th at 16 o’clock and include Beethoven’s 7th symphony and works by Richard Strauss.

Tickets will cost 295 € – the money will be enterely used for the fundraising campaign for the heritage façades which comprise a lot of natural stone. „The 1480 seats will bring some money“, said Wilhelm von Boddien, initiator of the giant reconstruction project. „Until now, we have brought together 84 million €, still 20 million is needed.“ 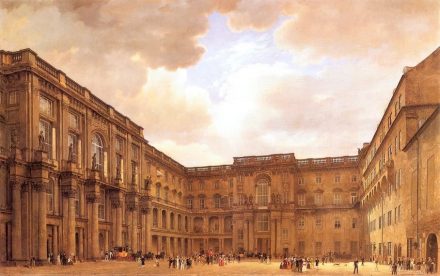 During the Days of the Open Construction Site, for the first time, the new Schlüterhof (Schlüter court) will be open for guests. Already in the historical building, it had been a public space for Berlin’s population located within the palace. On 3 sides, it has the original façades with lots of sandstone artworks and – as a strong contrast – one side a modern façade designed by architect Franco Stella in artificial stone.

Already in 1932 until 1940 the Berlin Philharmonic used to give concerts in the Schlüterhof. Thus the new event will also be part of the orchestra’s coping with its history during Germany’s Nazi-era.

Until the August event, the scaffolding will have disappeared. 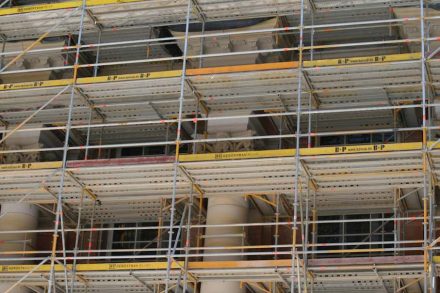 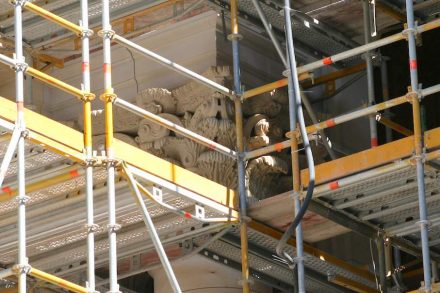 Now, about 9,000 m³ of stone over a surface of 22,500 m² will show replicas of the ancient decoration elements. Some of the elements survived the blast of the palace by the East-German regime after WWII.

Some of the most complex artistic works weigh tons. For this reason, they are not clad to the steel-reinforced concrete wall behind but integrated into a 60 cm-thick clinker wall laid by stonemasons.

This unusual and expensive type of façade was chosen to lend an air of permanence and valence to the building.

The Open Days of the Construction Site will also give visitors a chance to have a first glimpse of the rooms which will be used for museum exhibitions in the future. The opening of the Humboldtforum is planned for the end of 2019. 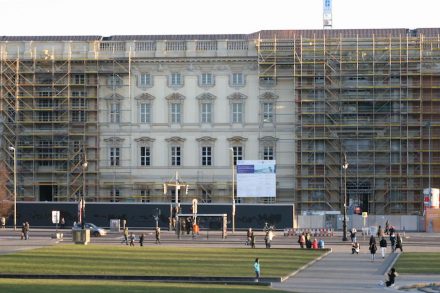 During the press conference for the August event, Johannes Wien, speaker of the Stiftung Humboldt Forum im Berliner Schloss, commented tongue-in-cheek: „It will – hopefully – be the last time that we have Days of the Open Construction Site.“