It is probably the most ambitious natural stone building site in Europe at the present time: The reconstruction of the Berlin Palace – Humboldtforum will consume some 9,000 m³ of stone over a surface of 22,500 m² heritage façade.

But first a few facts to facilitate understanding: the Palace is not the Charlottenburg Palace but rather a makeover of the City Palace. In the aftermath of WWII, the communist Government of the German Democratic Republic had the only hardly destroyed building torn down. 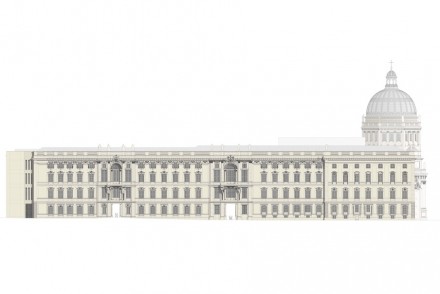 In June 2013, the German Parliament moved to have the Palace reconstructed according to original plans. Its most distinguishing factor is probably the ornaments in the sandstone façade. Reconstruction of the façade reached half-time in November 2015. 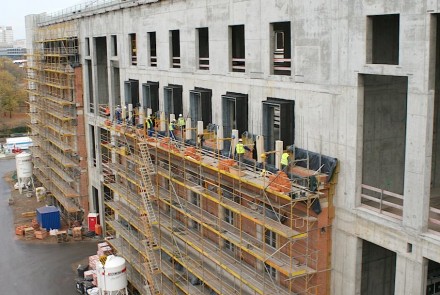 To counterweigh the mass of the sandstone elements, a 60 cm-thick brick wall was set in front of the steel-reinforced concrete walls. 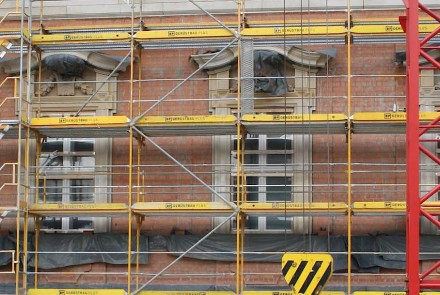 The stone elements are immured and affixed to the concrete with the aid of stainless steel anchoring.

The landlord and the architects chose this elaborate method to lend an air of permanence and valence to the building. 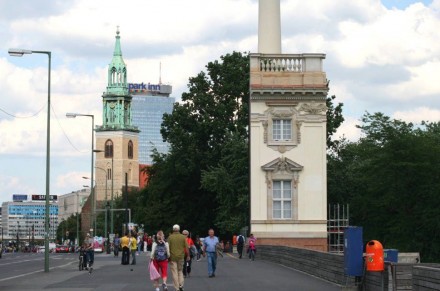 The bricks between the sandstone elements will be buffed as shown at this model of the top edge of the building. The color ochre was chosen as was the norm for representative buildings of the time. Mockers are quick to dub the color „Café au lait“ after a penchant to all things Francophile.

The façade also includes engineered stone elements namely in the sections which are not replicated according to original plans, i.e. the east wing of the complex running along the banks of the Spree river.

A special type of sandstone was developed for the purpose comprised to the most part of sandstone powder. This work was carried out by Dreßler Company.

Germany is contributing some 478 million €. An additional 15 million € were recently earmarked to help build a roof-top restaurant.

Berlin is contributing some 32 million € toward the project.

Reconstruction of the façade will be funded exclusively from private donations for which the heritage fund needs to collect 105.5 million €. 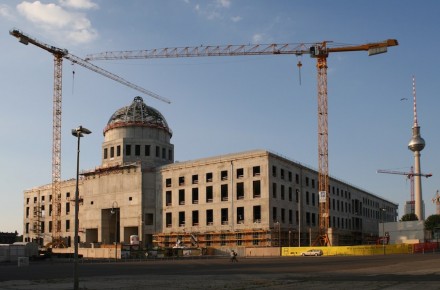 „The project is currently running within the planned budget and time-frame“, alluding to the problematic situation of Berlin’s International Airport. It is scheduled for completion in the summer of 2018.

Berlin will gain a unique center for former world cultures: the adjacent Museum Island already boasts forerunners of European cultures, e.g. Babylon, Egypt, Greece and Rome; The Palace – Humboldtforum will house artifacts from the Mayas and Aztecs as well as exhibits from China and the South Pacific. Important and significant collections from regions outside Europe will be moved to the two top floors of the building.

As usual, donations for the natural stone elements are welcome. Their names will go down in the annals of the building. 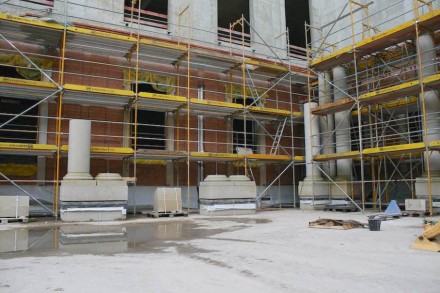