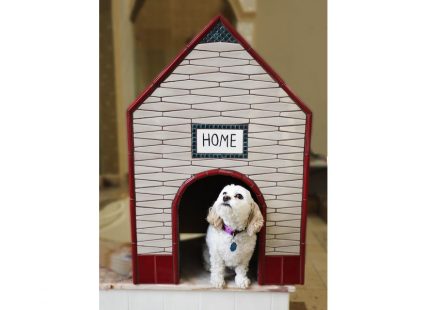 At Coverings 2018, fourteen doghouses tiled by TCNA (Tile Council of North America) members had been shown. These one-of-a-kind works of art were donated to the Homeless Pets Foundation. Italian designer Raffaello Galiotto already had launched natural stone houses for our four-legged furry friends.

Brazil 1: The country’s economy has been completely paralyzed since more than 10 days due to a strike of lorry drivers. The demonstrators took action in view of a rise of fuel costs and road charges. Abirochas, the country’s national association for the natural stone sector, has published a declaration by the Confederação Nacional da Indústria: „Everyone now has to play his role in solving the problem,“ is said there. Needed is the „immediate discussion about the structural problems of the country … and the reorganization of transportation as well as investments in infrastructure“ (Portuguese). Latest news: The organizer of Vitória Stone Fair has just confirmed that the fair will take place as scheduled despite all difficulties.

Stone Paper made of some 80% of limestone powder and 20% of resin is a product since some years on the market. No wood is needed for the production and the CaCO3 is available everywhere. Wired magazine hat brought up some doubts about this new alledgedly environmental friendly material.

„Five weird ways to spend this weekend in London“ were described on a webpage. Among them was a course in drystone walling.

By using Graphene scientists from the University of Exeter have created a new concrete which is said to be stronger, more durable and with a smaller carbon footprint than the normal material. They used nanoengineering technology.

A planned explosion at a quarry in a Rhode Island town sent granite flying into a nearby truck, injuring two town employees.

Video of the Month: mysterious sandstone faces accompanied by mystical music are on display by German artist Siegmar Münk.