Design: Stone houses for the birds and for man’s best friend 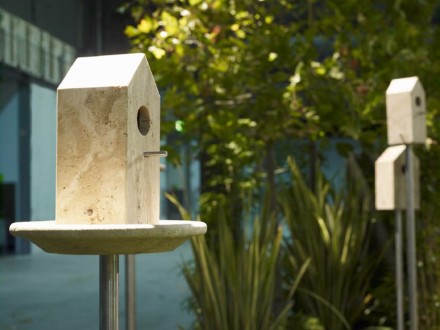 (October 2011) A „Pets Village“ was created by Italian designer Raffaello Galiotto in cooperation with Arredo di Pietra and presented at the AbitaMi in September of this year. It is comprised of tiny villas for four-legged inhabitants and bird houses. And: the arrangement of the houses at the trade fair was, in fact reminiscent of a small village.

The largest of the dog houses is 40 cm wide, 55 cm high and 70 cm long. Two smaller models are also available. The floor and walls are wood-clad on the interior for maximum comfort and easy cleaning. They are removable. There are ventilation holes on the back wall as well as one drainage hole.

A number of variations were created such as shed roofs, steps or side wings off the main building. There are, however, no doors – the lion’s den remains open, so to speak.

Bird houses are mounted on obelisks, chimneys or turrets. Next to them, bird baths and watering basins.

Travertine by Arredo di Pietra as producer and the designer put some thought to dirt and odour resistance: The stone is treated with the Redoxstone system coating it with nano-particles, in this case titanium dioxide. This naturally occurring oxide of titanium makes organic materials decomposable by sunlight so that they can be simply washed away by water. The nano-paricles also have sterilizing, deodorizing and anti-fouling properties. The new technique was discovered and developed by the Italian Infinity TIO2Lab.

It remains to be seen how well these homes are accepted by their destined inhabitants. But conflicts are predictable if animals like their new homes: children will want to play house there as well.