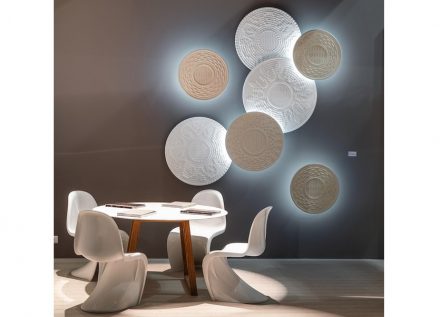 „What is the Mediterranean?“ is the question Lithea company asks in a press release. The firm is based on the island of Sicily and cooperates with designers who „have a special bond“ to the sea between Europe and Africa. The new collection presented at the Salone del Mobile 2018 in Milan has „Mediterranean Grafts“ as title extending the company’s design style from the last years. 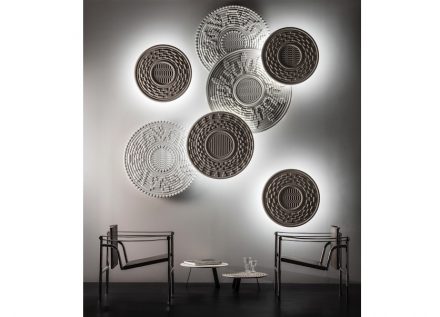 „Corbulas“ by Pierluigi Piu is one of the items of the collection: „In Sardinia, on the plains of Campidano, the round baskets, usually deep and wide, used to hold and measure flour and which women used to carry around balanced on their heads are called Corbulas. These baskets are made by intertwining lengths of hay and cane fibers, embellished with brightly colored brocade and wool inserts that create simple geometric or local flora and fauna inspired decorations. In the old days they would decorate farmers’ houses by hanging groups of baskets together on the walls. This project uses this secondary use as its subject, highlighting the bottom section of the basket, which is its most elaborate part and to which a striking halo of light has been added.
Material: 7 round, three-dimensional, 90, 80, 70, and 60 cm diameter panels, illuminated by LED lights and made in Crema Tunisi stone and White Diocleziano marble.“ 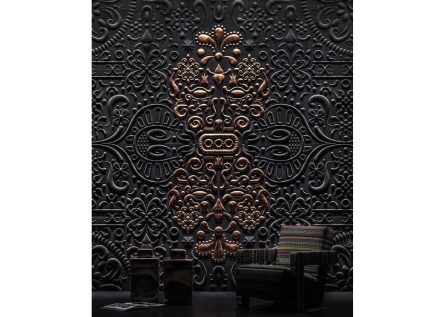 Another is „Caltagirone“ by Elena Salmistraro named after the village close to Catania city: „A reinterpretation of the exquisite Majolica pottery of Caltagirone, an abstract concept in which the decorative motif is modernized and stylised thanks to the use of Pietra Pece. On a rectangular panel soft, intertwined lines start from a central point creating a stylised façade, framed by the classic, traditionally Sicilian floral design which gives birth to a totally black figurative creation rendered even more precious by the copper leaf decoration that illuminates parts of the design.
Material: A 300 x 500 cm three-dimensional decorative panel in Pietra Pece, with a freestyle manual application of copper leaf using the mordant gilding technique. Pietra Pece, a soft limestone which is particularly appreciated for its chromatic characteristics, is exclusively extracted from a mine located in Ragusa: it is also known as „asphaltic rock” and it takes on a coloring that ranges from grey to dark brown and the presence of both fossils and veining make it unique. Known to mankind since antiquity, this stone has been used mainly for decorative purposes in churches and aristocratic buildings from the baroque period in south-eastern Sicily.“ 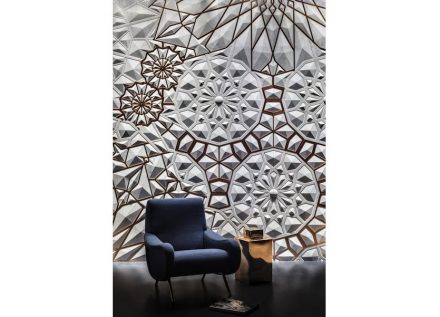 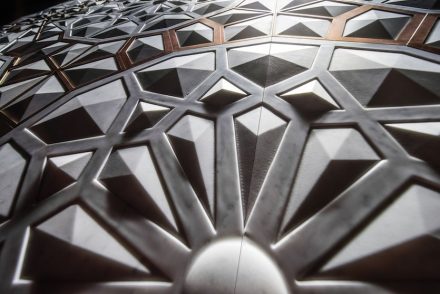 „Monreale“ by Elena Salmistraro: „Geometric arabesques are juxtaposed, superimposed, layered – just like the artistic history of the city of Monreale in which European and Arab cultures meet – to create a three-dimensional texture with a contemporary feel. The lines that intersect on the White Carrara marble give life to pyramids with an irregular base, in an unprecedented kaleidoscopic game enriched by metallic applications that refer to the precious golden friezes of the city’s cathedral.
Material: 300 x 500 cm three-dimensional decorative panel in Bianco Carrara marble, with copper sheet inserts. This marble is one of the main stone materials used in the floors and walls of the Cathedral of Monreale and other major churches of the Norman period in Sicily. 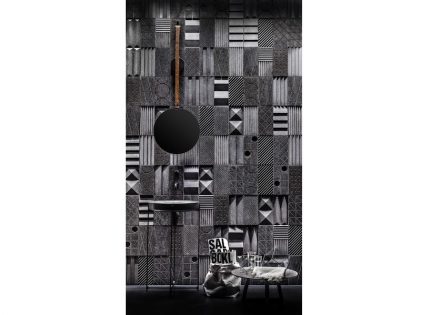 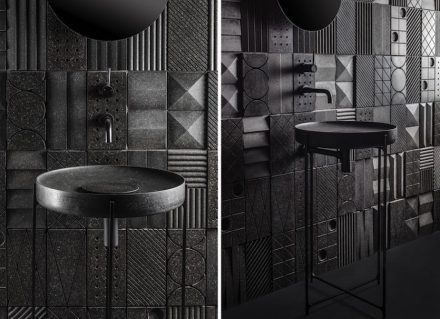 „Maioliche di Pietra“ by Martinelli Venezia Studio: „A collection of modular volcanic stone tiles characterized by three-dimensional design motifs that can be put together in various compositions. The idea for this design comes from the recollection of a small house-museum belonging to a majolica collector which was hidden in an eighteenth-century building in the historical center of Palermo. The rooms in this house encapsulate all that the Mediterranean represents, a vast, symbolic geographical variety that – through shape, material, color and graphical features – depicts its different origins and traditions. The collection includes a free-standing washbasin, made up of a circular volcanic stone sink held up by a thin iron structure and a series of small accessories which are easily grafted on to the pierced tiles.
Material: Volcanic stone which comes from the mines located at the foot of Mount Etna. Extremely resistant and very similar to granite in terms of hardness, it was used in the past for paving squares and roads, as decoration and building material for many aristocratic and religious buildings in the historical center of Catania and its provinces. A volcanic rock basin with an iron structure, varnished with an opaque black powder.“ 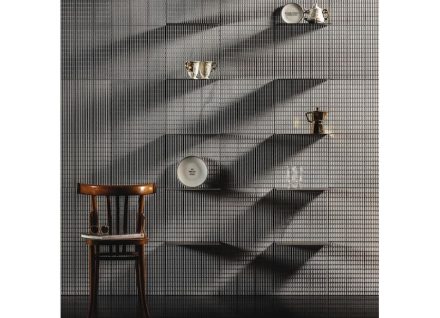 Back to the question at the top „What is the Mediterranean?“ Lithea gives the following answer: „It is a thousand things all together. It is not just one landscape, but countless landscapes. It is not just a sea, but a string of seas. It is not just one civilization, but many civilizations … an ancient melting pot laden with history and legends. Over thousands of years many things have occurred here and just as many things have been drawn into it, making the Mediterranean synonymous with exploration, discovery, understanding the unknown; a mixture of people, goods, trade but above all of culture. The Greeks were the first to call it „internal”, comparing it to the other sea, the Ocean, which is a vast external sea or so to say a surrounding sea and it has always been a meeting place, a crossroads, and thus a contamination, a hybridization: a stratification of skills and techniques which represent an extraordinary heritage that one must not only get to know but also refocus attention on through new approaches grafting the contemporary onto the traditional.“