According to research by New World Wealth, China’s population is set to attain US-American level within 10 years

The so-called Asia7-Countries are poised to attain hitherto unforeseen levels of growth of their wealth from 2017 to 2027 according to market research carried out by the new World Wealth: India will reach +200%, China +180%, Russia +80%, Australia +70%, New Zealand +70%, South Korea +40%, and Japan +30%.
Researchers report: „We expect co-operation and trade between these 7 countries to accelerate going forward, allowing them to surpass Europe to become the most powerful alliance of countries in the world“.

New World Wealth determines a country’s private wealth – in contrast to the usual analyses based on gross domestic product. The analysis takes into account the sum of citizens’ wealth (real-estate, money, investment funds, holdings) minus debt and obligations. A country’s wealth is not part of the calculation.

Based on the higher population, this method of analysis places countries with a higher head-count at the top of the ranking chart. 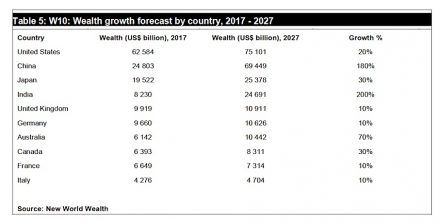 The predicted newly gained strength of the Asia7-Countries allows inferences with regard to the richest countries worldwide. So seen, the USA will still rank first on the wealth scale, closely followed by China. Australia will have overtaken Canada and run neck-a-neck with Germany and Great Britain. India will take on 4th place, leaving Germany and Great Britain behind.
All in all, economists expect that global wealth will increase by +50% on average by 2027 and reach the 321 trilllion US-$-level.

The study zooms in on smaller Asian countries with high levels of growth:
* Sri Lanka +200%: a safe haven with a high level of education and good knowledge of English;
* Vietnam +200%: Asia’s manufacturing hub;
* Mauritius +150%: tax haven and commerce-friendly atmosphere.

The study also analyses migration of the rich and super-rich. The economists infer the activity within countries and cities.