Casa Elvira by Pepa Díaz: The table – a central point of focus for Iberian homes and family 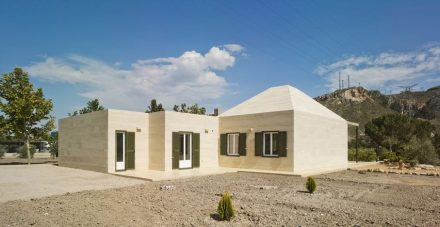 „People and where they live“ are the center of her architecture, writes Pepa Díaz. People in the Mediterranean culture of Southern Spain, live for the family and are influenced by the ochre-brown hues of the rolling hills of Sierra de Peñarrubia, where summers are hot and dry. 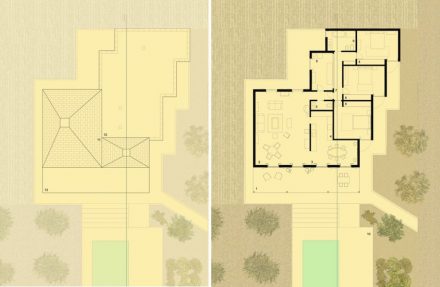 Pepa Díaz dubs them her „geometrized landscape“. Reference to the local cordillera is reinterpreted in straight lines; a gable-roof with slanted ends. 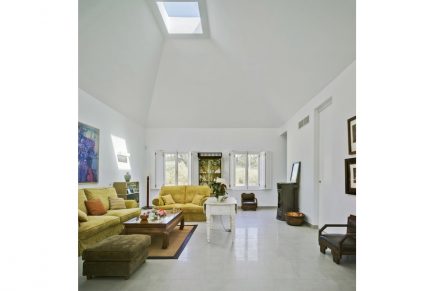 This is where family life takes place. The dining room table is positioned below the skylight. „In Spain there is a lot of life around a table, and I wanted to pay tribute to this,“ she writes.

The skylight captures the sun on its journey throughout the day and transposes it indoors.

„I really like high ceilings, there are numerous studies which indicate that people think and feel better when the ceiling is high, and I feel this too.“ 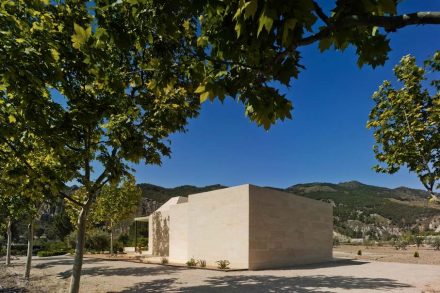 The walls of the dwelling are closed westward and to the north. To the east and south the complex has windows – the view to the south overlooks the Sierra de Peñarrubia and the Castle of Lorca, whereas the view toward the East shows a breathtaking sunrise all the way into the mid-day sun. „It’s important that the inhabitants wake up with the sunrise,“ Pepa Diáz tells us.

It took two years of dialog with the family before the concept stood completed.

The façades and gable roofs are clad in Albamiel Sandstone. The stone used for wall cladding is 4 cm tick and contributes to insulation of the house. Toward the inside the layer is followed by 11.5 cm of solid wall, 5 cm air space and 4 cm insulation, with plaster or gyprock and a coat of paint.

The stone was provided by Areniscal Rosal Company which quarries limestone and sandstone in close proximity. 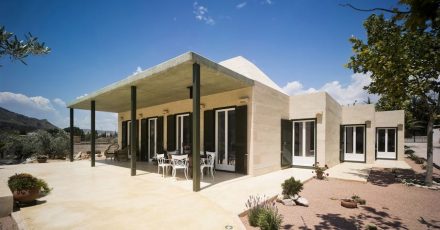