At Marmomac 2018, the once marvelous „Italian Stone Theatre“ submerged in the water, so to say 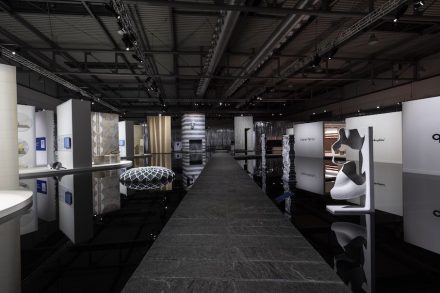 While the idea previously had been to fathom the stone sector’s future, this time Italian’s firms and designers only celebrated their state of the art

One peculiarity of this year’s Marmomac (September 26 – 29, 2018) was its internationality: „More than 60% of the 1,600 exhibiting companies were international. And out of 68,000 visitors arriving in Verona over the four days, 62% were international, compared to a 60% share posted in 2017,” according to the press release.

Yet Hall 1 stood in strong contrast to this: celebrated was only the „Italian Excellence“ a term much used by the fair and the Italian stone sector itself. It expresses their know-how and their creativity.

Once the „Italian Stone Theatre“ in Hall 1 had been a laboratory for the stone sector’s future worldwide. With industry designer Raffaello Galiotto as the guide, Italian firms, designers and architects as vanguards had fathomed what the future might be.

Figuratively speaking, the modus operandi had been to hit the ground running, touch base at the horizon and run back to the baseline.

But this year’s presentations titled „Stone and Water“ were not more than today’s state of the art showing what firms, designers and architects have in mind today and what they had already posted on Facebook yesterday.

But apart from this, the presentation as such in Hall 1 as such was marvelous again – although some visitors did not pay attention and stepped into the water.

About „Percorsi d’Arte“ (Ways of art) discussing robotics and sculpting and several other works we will report separately.

One more remark: At the opening ceremony, Verona’s mayor announced that the formerly abandoned industry areas between the fairground and the station shall be revitalized. Vinitaly wine fair will have events maybe in the former tobacco factory.

The presentations in Hall 1 as reflected by the fair’s press releases: