In Stone Age in Europe, trading of flintstone or chert was a business all over the Alpes and the continent. Stones with special qualities were even transported over long distances.

Now scientists have found that also for the Middle Stone Age in Southern Africa such tools connected communities over long time periods and over vast geographical areas.

The tools – mainly blades and backed knives from the Howiesons Poort – were found in various layers in the Klipdrift Shelter, in the southern Cape in South Africa. They were examined by a group of lithic experts, who found distinct similarities to tools from sites in South Africa’s Western Cape, over 300 km away, in particular with the Diepkloof Rock Shelter site.

„While regional specificities in the tools from the various sites exist, the similarities of Klipdrift Shelter with the site of Diepkloof Rock Shelter are astonishing,” says Dr. Katja Douze, the corresponding author of the study.

The team, under the leadership of Professor Christopher Henshilwood from Wits University and the University of Bergen’s SapienCE Centre for Early Sapiens Behaviour, examined thousands of stone tools that were excavated from 7 layers that represent a time period of between 66,000 years ago and 59,000 years ago, to establish the differences in stone tool design over time.

The items were compared the stone tools from various other sites in Howiesons Poort.

The Middle Stone Age in Africa stretches from 350,000 years ago to 25,000 years ago and is a key period for understanding the development of the first Homo sapiens, their behavioral changes through time and their movements in-and-out of Africa. 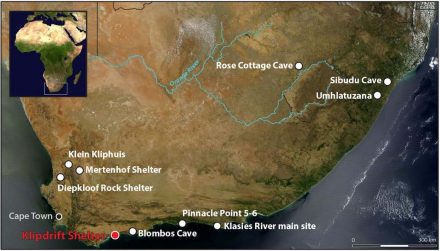 The tools represent the earlier phases of the Howiesons Poort were found to be made from heat-treated silcrete, while those from later phases were made from less homogeneous rocks such as quartz and quartzite. This change happens together with changes in tool production strategies. „The changes over time seems to reflect cultural changes, rather than immediate alterations forced on the designers by changes in climate“, says Douze.

„Our preconceived idea of prehistoric groups is that they just struggled to survive, but in fact, they were very adaptable to environmental circumstances. There seems to be no synchrony between modification in design choices and environmental changes. However, the aridification of the area over time might have led to a very gradual change that led to the end of the Howiesons Poort.“

Named after Howieson’s Poort Shelter archeological site near Grahamstown in South Africa, the Howiesons Poort is a specific techno-culture within the Middle Stone Age that evolves in southern Africa after 100,000 years ago at the Diepkloof Shelter, but between 66,000 – 59,000 years at most other Howiesons Poort sites. 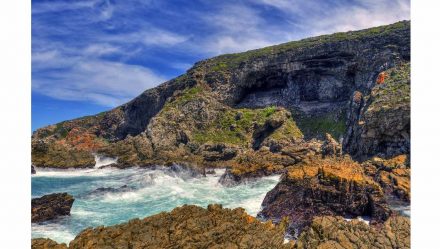 The characteristics of the Howiesons Poort are strongly distinctive from other Middle Stone Age industries as it is characterized by the production of small blades and backed tools, used as hunting armatures as much as for cutting flesh, while other MSA industries show flake, large blade, and point productions.

Source: University of the Witwatersrand, Johannesburg