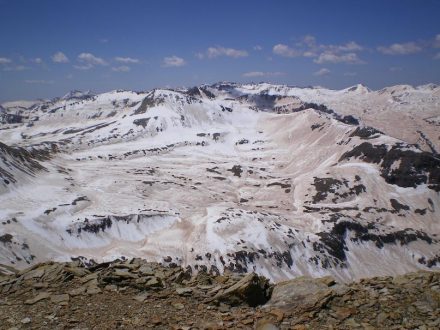 More than a century ago, British meteorologist Henry Blanford noted a connection between springtime snow cover on the Tibetan Plateau and Himalaya mountain range and the intensity of the summer monsoon season in India. Hundreds of studies have supported this relationship since Blanford first published his hypothesis in 1884, finding that less snow cover often correlates to a wetter monsoon. But so far, researchers have struggled to explain why this connection between snow cover and monsoon intensity exists.

New research led by William Lau, a research scientist at the University of Maryland’s Earth System Science Interdisciplinary Center (ESSIC), provides a plausible mechanism to explain Blanford’s observations. Surprisingly, the explanation involves dust transported from the deserts of the Middle East, more than a thousand miles away.

Using a powerful NASA-developed atmospheric model, Lau found that large quantities of dark aerosols – airborne particles such as dust and soot that absorb sunlight – settle on top of the Tibetan Plateau’s snowpack in spring before the monsoons begin. These dark aerosols cause the snow to absorb more sunlight and melt more quickly.

The model findings suggest that, among these dark aerosols, windblown dust from the Middle East has the most powerful snow-darkening effect.

In years with heavy springtime dust deposition, the end result is reduced snow cover across the Tibetan Plateau, which leads to warmer temperatures on the ground and in the air above it. This in turn sets off a series of interconnected feedback loops that intensify India’s summer monsoon.

The research paper, „Impact of snow-darkening by deposition of light-absorbing aerosols on snow cover in the Himalaya-Tibetan-Plateau and influence on the Asian Summer monsoon: A possible mechanism for the Blanford Hypothesis,“ William Lau, and Kyu-Myong Kim, was published in the journal Atmosphere on November 12, 2018.