Primeira Pedra: a marble carpet instead of pavement in an unpretentious London district 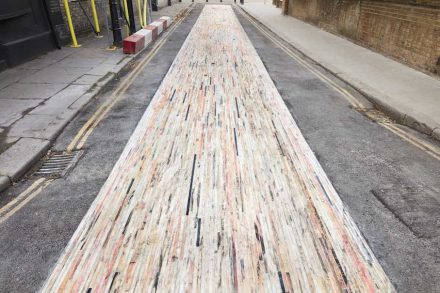 What to do with all the waste, is an increasingly important question for the natural stone branch. Waste control and sustainability are under public scrutiny, for one thing, and for another, the branch is beginning to take its credo seriously: a material formed millions of years ago by nature itself deserves high esteem.

Of course one must concede that much of the waste from production ensues naturally: raw blocks are cut from the rock without pre-selected measurements, so there will be remnants after processing.

Portuguese project Primeira Pedra (First Stone) has caught the interest of Cypriot designer Michael Anastassiades for an idea which puts production waste to good use: The remnants were used to pave a London side street. 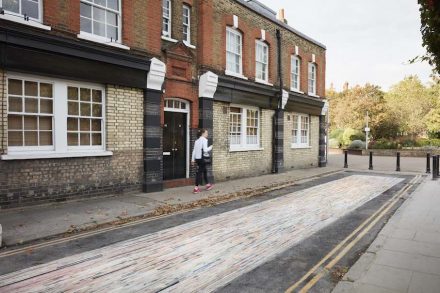 The idea was influenced by Portugal’s long tradition of Calçada Portuguesa, a decorative cobblestone pavement for sidewalks.

Note that Michael Anastassiades’ idea was realized in Southwark, a simple district of England’s capital, famous perhaps as the home of Charles Dickens. Current efforts are under way to up-grade the district. 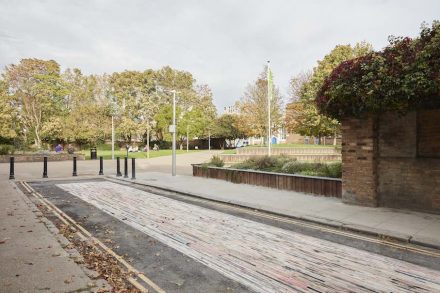 The marble pavement is a posh gap-fil, one could say: a golden bridge, between the simple dwellings and the humble Mint Street Park.

In a way, stone is afforded the status it deserves, namely a material for all.

Anastassiades breaks the current prejudice of the stone branch on stone as a luxury building material suitable for the rich only. Particularly „Made in Italy“ has this target group in mind.

The installation was part of the 2018 London Design Week and will remain in place as a permanent installation. The address is Mint Street, London, SE1 1QX. 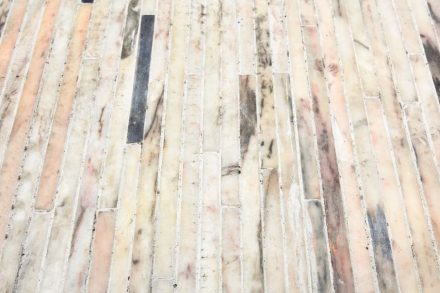 Portuguese marble in pink and ocher hues was used primarily. But slate, too, came to play all provided by Dimpomar and Mármores Galrão Companies.
Strips of stone were agglomerated to stone slabs with some portions of greater depth to lend extra stability.

We had reported on other interesting ideas on Primeira Pedra in previous editions. The project involved participation by the natural stone organization Assimagra and the Experimentadesign Agency. Funding was provided by the EU.