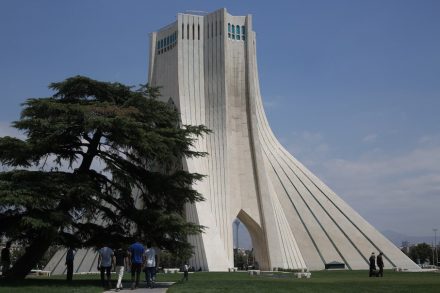 INSTEX will be a vehicle the facilitate trade between the European Union and Iran. It might help stone exports from Iran and vice versa stone machinery imports to Iran coming from European firms. The foreign ministers of France, Germany, and Britain announced the creation of this new business vehicle, according to a French government webpage.

A timetable when Instex (Instrument in Support of Trade Exchanges) will start was not given.

On the long term, also non-European countries might use it.

The aim of the initiative is to circumvent the sanctions of US-president Donald Trump imposed against Iran in November 2018.

„Instex will support legitimate European trade with Iran, focusing initially on the sectors most essential to the Iranian population – such as pharmaceutical, medical devices, and agri-food goods,“ as said on the webpage. „Legitimate“ here means goods which are in accordance with United Nations Security Council resolution 2231.

The focus of Instex is on smaller companies to facilitate their trade with non-critical-goods. The stone sector might directly profit.

The concept of Instex is old and was often used during Cold War for trade between Eastern and Western countries: Now Iran will not get money as payment for the goods it exports but wares it needs.

Similar triangular transactions are an everyday issue in trade between members of the European Union in order to facilitate value-added tax clearings. 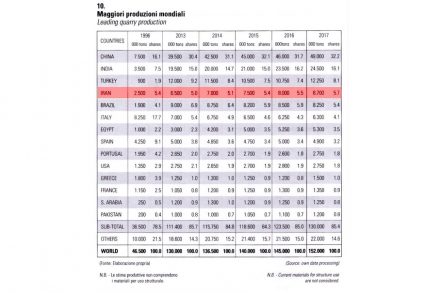 In recent years, Iran has become the fourth biggest producer of natural stone worldwide, as the table from the „XXIX Report Marble and Stone in the World“ by Dr. Carlo Montani shows. In 207, Iran had reached 5,7% of the world stone production.

Not comprised in the table are possible consequences of Trump’s sanctions.

The webpage of Irse Stone Fair in Tehran sees the country at a much higher share of „11.63% of world annual production“ with 13.5 million t of stone coming from 1600 quarries. 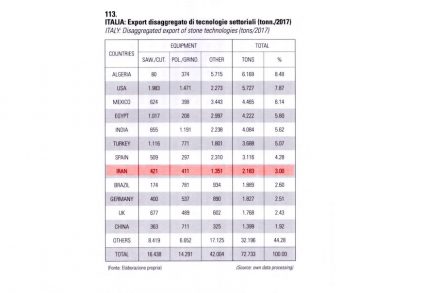 Iran has imported a lot of stone quarrying and processing technology. The table from Dr. Carlo Montani’s book shows the country’s share in Italian exports in this sector.

At Marmomacc 2015, an Iranian delegation with the Deputy Minister of Economy, Trade and Mining Activities presented the country’s offers for business partnerships and investments.

„XXIX Report Marble and Stone in the World“