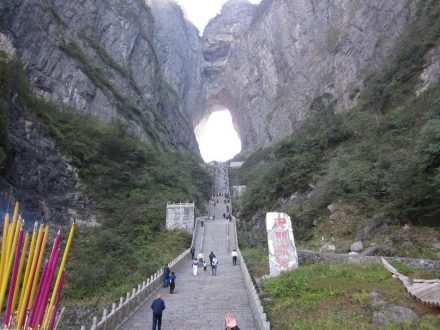 Heaven’s Gate the name of a famous rock formation in China’s Tianmen Mountains in the Province of Hunan. There, spectacular hiking trails are dramatically interspersed with glass bottom skywalks (1, 2).

The diamond branch is also negatively affected by the problem of new engineered stone, cultivated in a laboratory and indistinguishable from the Real McCoy to the beholders’ naked eye. As was reported by the Financial Times in its January 4th, 2019 edition, De Beers, the market leader, has called a subsidiary company to life, which will be producing artificial diamonds. De Beers hopes to make a profit in the sector but also to gain some control over prices: The new stones will be much less costly and will be perceived as an entirely different product by the consumer (1, 2).

„Engineered Materials Dominate“ as kitchen materials, webportal Houzz has found out in a survey among more then 1300 US-houseowners: „Engineered quartz (48%) surpassed all natural stone materials combined (43%) in popularity.“

A tribute to thousands of rescue and recovery workers who labored in the ruins of the World Trade Center is taking shape in Vermont. Slabs of granite are to be installed this spring at the national Sept. 11 memorial.

The Intercontinental Shanghai Wonderland hotel nears completition. It is located in am abondoned quarry, has trhe rock on both sides of its glasss façade and has wo of the 18 stories underwater in the quarry lake. Architects are Jade + QA.

Restoration work on the 123 m high towers of Antwerp Cathedral will go on for the next 2 years. The natural at the façades will be cleaned an restored, among other works. 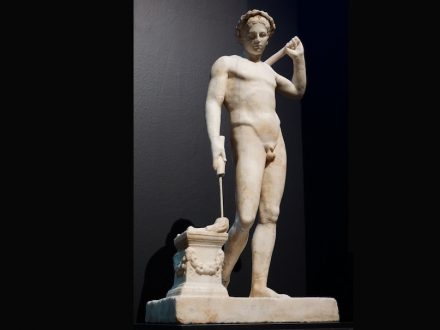 With the debates surrounding feminism, gender studies, and, more recently, #MeToo, questions are increasingly being raised about the artistic representation of naked bodies, Antikenmuseum in Basel writes. Yet the nude figure is a universal visual theme, deeply rooted in the history of art. The exhibition „Naked! The art of nudity“ in the Museum (until April 28, 2019) illuminates every facet of the art of nudity in the ancient world, probing its meaning and demonstrating its legacy.

„Everything Marble“ shows small everyday-items made of Italian marble (1, 2).

„Internal Paving – Merits of Natural Stone vs. Manufactured Materials“ is the title of a comparison at the World of Stones portal.

Stone World Magazine gives data about the activities of the Natural Stone Institute.

At the Taj Mahal, policemen will be equipped with slingshots to meet away wild monkeys. The animals attacked visitors (who used to feed them) and caused damage to the structure of the monument (1, 2).

The exhibition „Syria Matters” (until April 30, 2019 in the Museum of Islamic Art, Doha) explores „Syria’s history, illuminating its key role in the artistic and intellectual history of the world“, according to the museum’s webpage.

Video of the month: snorkeling and diving in Island’s Silfra-Gorge in the Thingvellir National Park: The geological fault between the North American and Eurasian continental plateaus runs directly underneath the Island. The plateaus drift apart some 2 cm every year. Divers navigate in the crystal-clear glacial water between steep walls of the gorge from America to Europe (1, 2).