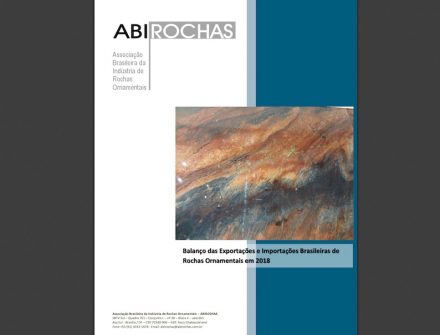 In South America, too, engineered stone is playing an increasingly important role

The good news first, even if it is a questionable achievement from the point of view of the natural stone branch: Brazil’s exports in engineered stone and quartz composites amounted to 3.8 million US-$ or 6.5 t in 2018 according to Abirochas’ publication „Informe 1/2019“.

The footnote by the authors at Kistemann & Chiodi Consultants was most interesting: „… this deserves to be noticed and a follow-up“. In the past few years they never tired to warn of the emerging engineered stone.

Is this a sign of change in Brazil’s natural stone economy, e.g.: if you can’t beat them, join them – and exploit the earnings along the way (quote: „be noticed and a follow-up“).

After all: one of the big fish in the branch, namely Grupo Guidoni, stated just that in an interview with Stone-Ideas.com and has already invested considerable sums of money in production sites and material at home and in Spain (see below).

Note: even in the diamond branch, synthetic stones have suddenly appeared on the market. DeBeers, leader in the branch, recently jumped on the bandwagon and began producing synthetic diamonds. The aim, as we had reported: was to have a say in the market and do keep prices considerably lower than those of real diamonds.

Back to Abirochas’ statistics. We restrict our report to keywords as the statistics merely confirm the trend of the last few years: