Guidoni Group: „One Stop Shop“-concept places the customer at the center of sales replacing the stone or its tradition 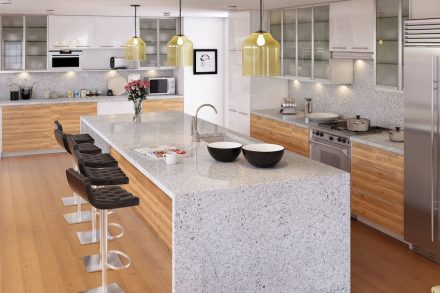 Many see the marble and granite trade in a sustained rut despite a constant increase in trade during the last decades. One reason for the disquiet is the continuous flow of new competition on the market, e.g.: over-sized ceramic slabs or engineered stone and quartz composites.

Growing competition is accompanied by a vague sense of threat in the branch, which, in turn, arises from the radical change in markets in the building and interior decorating sectors over the last few years, and the fact that the stone producers failed to jump on the band wagon in time: the market is no-longer producer-oriented but rather focused on the customer’s wishes.

Literally this means that the compendium of material on offer is adapting to demand: new materials to choose from are cropping up beside existing materials.

Guidoni, Brazil’s natural stone behemoth, has adopted a pragmatic marketing solution: The young generation has taken over business and it has turned the tide with a „One Stop Shop“-concept. We spoke with Rayner Guidoni, Vice-president of the group at this year’s Marmomac. 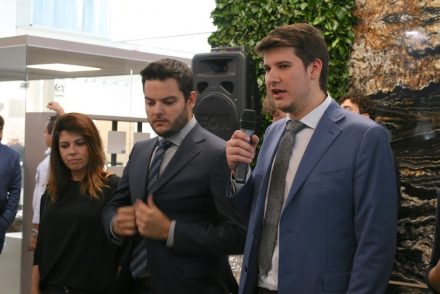 „One Stop Shop“ means that the company’s showrooms will offer everything the customer needs and wants. We recall that stonemasons are still reticent about taking on engineered stone or ceramic tiles into their line of products.

Guidoni has been producing engineered stone for some time now, called Topzstone fabricated in Brazil’s province of Espírito Santo and in Spain. Rayner Guidoni reveals the reason: „We saw that there was a demand for these products and we couldn’t merely stand in the sidelines and watch others close the deals.“

The statement reveals two important facts: Guidoni places the client at the center of focus – and Guidoni knows what is on demand!

But during the course of conversation another aspect of the „One Stop Shop“ soon comes to light: „Market analysis is our daily bread“ says the group’s vice-president and in his tone of voice one hears that he couldn’t imagine his business otherwise.

The company comprises an 18-manpower-strong marketing department of which 3 members are busy gathering data on demand in foreign countries. Popular colors by county and ethnic background or the implementation of natural stone are two fields of inquiry.

To this end, the company’s representatives regularly visit trade fairs for furniture and design. „At Milan’s Salone del Mobile, we discovered that green stone was represented at many stands“, Rayner Guidoni names one insight.

So the company placed its green stone in the foreground of marketing efforts. „We market according to demand“, the manager reiterates the company guideline.

But that’s not as easy as it may sound: unlike ceramic, stone’s color doesn’t change on demand. A quarry produces what it contains. 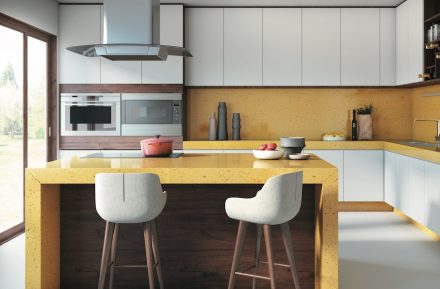 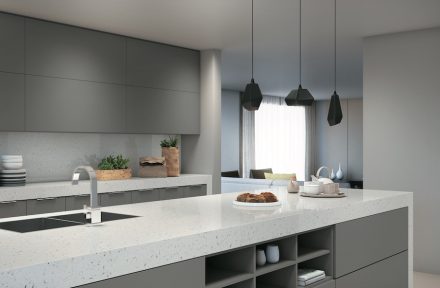 Guidoni is in the lucky position of having acquired vast stockyards in Mato Grosso do Sul in Brazil’s south with every color imaginable – only those on demand are exploited.

„We will be presenting a whole gamut of new stone types at the Fair in Vitória next year“, Rayner Guidoni announces.

In doing so, he breaks with an age-old tradition, i.e. the concept that natural stone is not a fashion product.

Guidoni sees most stone types as having a limited marketing viability. „The exceptions are black and white and a few standard types“.

Also, part of the concept: by producing a sizable portion from its own quarry production, Guidoni has a handle on pricing.

The last word is not yet spoken on the position of engineered stone in Guidoni’s „One Stop Shops“. Will products be bought on demand, or will new brand names under the company’s own label be added to the assortment?

Exclusivity is a decisive factor at the core of Guidoni’s brand name products. „We don’t want to offer the same countertops seen at McDonald’s.“

But what does Guidoni’s concept boil down to for a European producer who has been quarrying limestone or marble for two centuries or more and has no other stone available?

Guidoni’s marketing revolves around the customer and how to bring traditional stone close to the buyer.

How this can be achieved is well known: market the stone as local product and emphasize the sustainability and the emotional qualities of the material.

And above all, showing the useful items that can be made of stone. Note: useful, not spectacularly eccentric items – these only serve to scare off architects and builders.