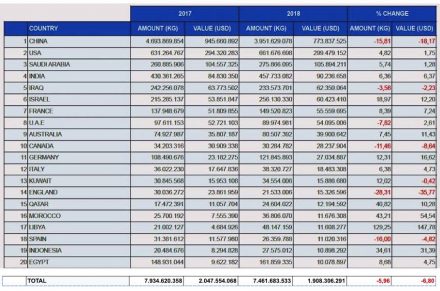 With respect to exports of raw blocks to China, Turkey faced a major crash (-)18%

The recession threw the country back below the magical 2 billion US-$ mark according to the statistics of Trade Organization IMIB (Istanbul Mineral Exporters’ Association).

The main reason for the decline was a heavy drop in exports to China: down by (-)18.17% to 773.837 million US-$ (2017: 945,666 million US-$). The slowdown in the Chinese economy had an immediate effect on the Turkish natural stone economy. Note: Turkey exports to China almost exclusively raw blocks.

Healthy growth could also be seen with regard to exports to Indonesia, the Far East’s most significant growing market in the Islamic World.

Considerable growth was noted also in exports to Germany, and, albeit on a much lower level, to Israel. Exports to Great Britain, on the other hand, crashed by over (-)30%.