After years of recession in natural stone exports, Turkey has again overcome the 2 billion US-$ hurdle

Turkish trade magazines uttered glee at the markets jumped the magical 2 billion US-$ hurdle for exports in 2017, to be precise, 2.048 billion US-$. This was a solid +13.43% increase compared to the previous year. The jubilation was based for the most part on the upward trend after years of sustained recession.

But to achieve this increase +21.78% more material (7.936 million t) had to be exported.
Thus, the average price/t dropped once again.

Other aspects are also worth considering:
* more than half the total sum was obtained by the sale of raw blocks (1.102 billion US-$);
* of these 0.946 billion US-$ were sales to China alone.

So, the statistics are exactly mirrored in China’s monetary curves, which we had already looked at in some detail in a previous issue.

Figuratively speaking: both countries are sitting in one boat, China at the helm and Turkey astern.
The fact that exports to India were up sharply (by +54.03% equaling 85 million US-$), merely shows that Turkey was on the spot the moment import restrictions for marble were lifted.

As far as value added products were concerned, development was not good. Even though Turkey could chalk up a marginal increase in trade with the USA (+2.15%), the price/t was +11.79% higher which means that turnover/t was down.

All in all, the increase in trade with the USA in no way makes up for the losses of the previous year by -11.2%.

And last but not least, some other big buyers of value added products, e.g. Saudi Arabia, showed negative growth in 2017. 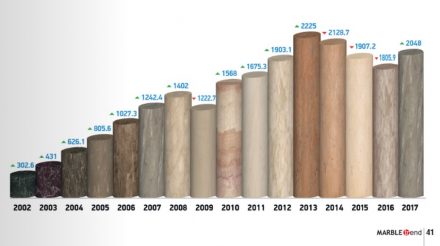 We are curious as to the development of figures in the next few years. The Turkish stone branch is on the right path as was determined at the Marble Trade Fair, Izmir.

Turkish Trade organizations made concerted efforts in 2017 to „contact and remain in touch with consumers in target countries“, according to media reports. By this architects and designers are meant – target countries are Canada, Mexico, Brazil, Indonesia and Malaysia as reported by Aydin Dinçer, President of IMIB.

The Turkish Government has invested considerable funds in its UR-GE-Program, aimed at boosting competitiveness of Turkey internationally. Funds are distributed according to the following concept: among applicants, the best concept is chosen to carry out the job. The results are evaluated at the end of the year.

IMIB (Istanbul Mineral Exporters’ Association) presented its campaign at the MIPIM Trade Fair in Cannes in March 2018 „I am Turkish Stone“. Businessmen in the real-estate branch elaborately presented Turkish material.

The EIB (Aegean Exporters Association) took action in London in January 2018. The venue was chosen because of the many large architectural firms maintaining offices there. We heard that representatives were happy to display material provided in their library of samples.