National Bank of Oman: it’s all about the Sultan’s Land – not about the power of money 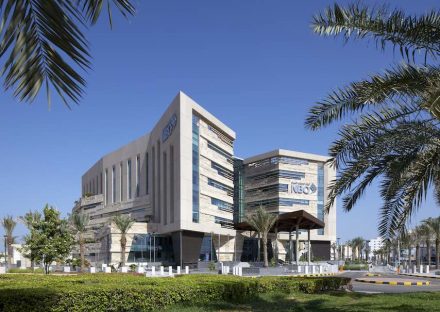 National banks usually bow not only to the changing tastes by decorating façades like antique portals, but also aim to reflect the strength of currency and the power of money. At the same time they are practically as safe as a vault.

Not so in the case of the newly built National Bank of the Sultan of Oman designed by British Architects LOM: a clear analogy to the stony desert landscape surrounding the Capital city of Muscat with an atrium resembling a wadi.

Of course strict security measures are also in place with a view to today’s threat of terrorist attacks.

The façade is dominated by limestone originating from quarries near the Omani city of Sohar. But unlike the average bank building erected during the 20th century, the stone elements are not merely mounted on a predominantly glass façade. Here the façade also mirrors the landscape as seen through the building’s windows. 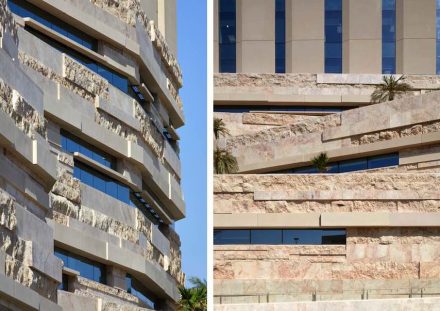 Raw blocks of stone dominate the lower stories of the building. As one looks further upward, sleek surfaces take over more and more of the surface until finally they fill the design entirely.

One can see a town in the mountain range of the capital camouflaged in the outer walls of the cliffs. Temperatures in Oman can reach 40° or even 50°C in summer. Anyone bold enough to brave the elements immediately ducks to avoid the searing heat. 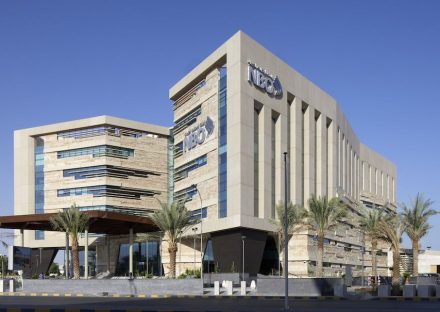 The top floors are reminiscent of the country’s fortresses like Nizwa, Nakhal and Bahla, writes the Daily Times of Oman.

The windows between the limestone elements are receded lending an appearance of geological strata while protecting the interior from the sun’s punishing rays. The block layers on the outside walls are not merely decorative. They serve as an anchor for hanging plants on the top stories: „The building will evolve over time and becomes part of the future landscape of Muscat as the city develops“ according to the architects’ webpage. 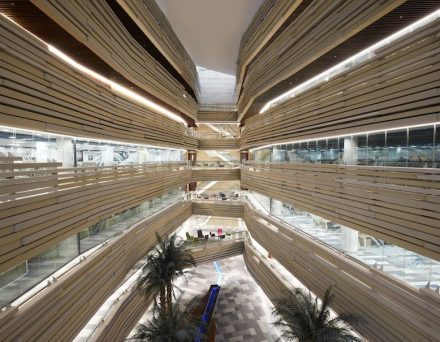 The Atrium is conceived to emulate one of the many spectacular gorges of Oman. Water plays a central role in the Sultanate what with its numerous wells and sources. The façade’s reference to geological strata finds its counterpart in the atrium’s reference to Oman’s Aflaj, the ancient irrigation system unique to the Sultanate. 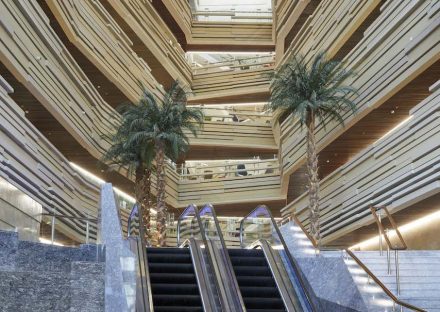 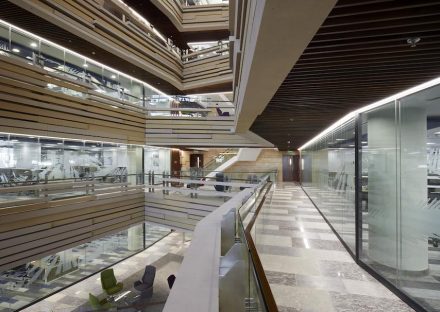 The building has it’s center in the concrete structure with a mass of 100,000 t. In combination with special ceilings with strategic points attached to the façade, it gives stability in case of earthquakes. Oman is situated on a tectonic fault. The two lower stories are equipped with 7,000 kW power supply.

The national bank is situated in proximity to the Sultan’s Palace and the Grand Mosque of the Capital. 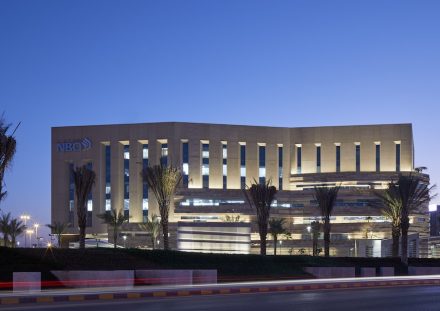