In commemoration of the 500th anniversary of Leonardo da Vinci’s death: catapults for heavy chunks and a quartzite bearing his name 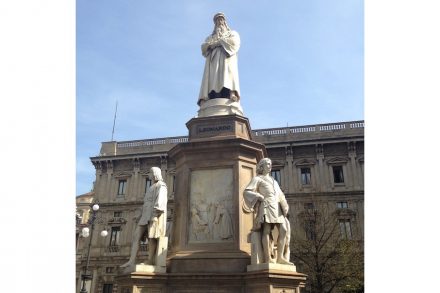 Allegedly, a draft of him of a sawing apparatus for cutting marble in the quarry purportedly exist – and little wonder, at that. During his lifetime, Leonardo da Vinci (1452-1519) experienced the Milan Cathedral as a huge construction site, and even in the building’s first version noble stone played an important role.

May 2nd, 2019 marks the 500th anniversary of his death, and, as usual when persons of historical interest celebrate an anniversary, we did some research to find a connection to natural stone.

His drafts occasionally contained sketches of mountains or rock formations. These may have been studies for later works of art, e.g.: the Mona Lisa, in which rock formations can be seen in the background.

He was far ahead of his time in his theoretical reflections about stones. He did not want to accept the simple explanation that it was the deluge that had brought the fossils to the limestone mountains. Rather, he wrote that „where today is land, once was sea”. With this and his analyzes of sedimentary stones’ stratifications, he predicted the rock cycle.
The Mona Lisa is considered the most famous painting in existence not least on account of the subject’s mysterious smile.

The painting’s path to fame was a strange one: in 1911 the Mona Lisa mysteriously disappeared from the Louvre in Paris, only to be found in 1913 in Florence in the possession of an art thief by the name of Vincenzo Peruggia. Peruggia claimed to have no intention of making a profit on the painting. He declaired to have planned to return the painting to Italy from whence it originated. The magistrates handled Peruggia’s case with leniency. One year later in a politically highly charged atmosphere, the painting was returned to Paris via Rome and Milan.

The interest of the media was overwhelming. As early as 1919, Marcel Duchamps gave the Mona Lisa a moustache, and this artwork, too soon became an icon of the art community.

Though we were unable to find the drawings of Leonardo’s stone saw, many of his drafts revolve around stone, e.g.: an apparatus to enable lifting and transposing heavy objects such as stone blocks or columns.

One apparatus is meant to measure vaults.

One aspect is worth noticing: On the one hand, Leonardo was not a friedn of the military, but on the other hand some of his drawings include fantastic war machines.

But none of his machines were realized during his lifetime. In any event, the first biography, published a mere 50 years post mortem, mentions such a prototype.

Was Leonardo no engineer after all but rather only an artistic scribe or teacher with modern didactic methods?
The idea crops up in some publications outside Italy always referring to the fact that it was Benito Mussolini who advanced Leonardo to the title of engineer during the 1939 national exhibit. It was the first time that his drafts were presented as prototypes – as is all the rage today.

The illegitimate Leonardo originating from the town of Vinci was without a doubt a gifted artist. His presentations of the human body are nothing short of fascinating. Beholders are immediately driven by a fascination for exact science.

One might even see him as a forerunner of the age of enlightenment which took a grip on the world some 100 years later.

As for stone, Leonardo mentions a quartzite from the city of Barge in northern Italy in his „Codice G“ in 1511.

Meanwhile, the region’s trade organization named the stone „Pietra di Leonardo da Vinci“. By the way: the area is also known for its Pietra di Luserna, which was recently used as flooring for the Abu Dhabi Louvre.

Less well known are the fables Leonardo wrote or those attributed to him, e.g. the one of steel and flint: the stone complains that it always has to bear the shock to produce the spark which fires the weapon – in the fable it is taught that patience and submission is needed to achieve „marvelous results“.

The Milan Museum of Science and Technology is dedicating an exhibit to Leonardo entitled „Parade“. It is scheduled to open to the public on July 19th. Worldwide, there are almost uncountable exhibits dedicated to Leonardo this year.