Budri at the Salone del Mobile: natural Stone not known in nature 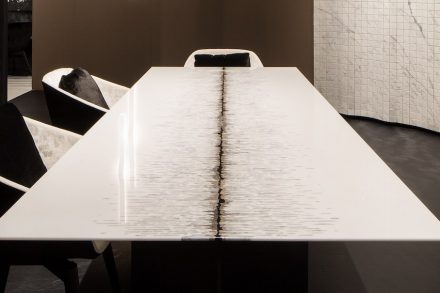 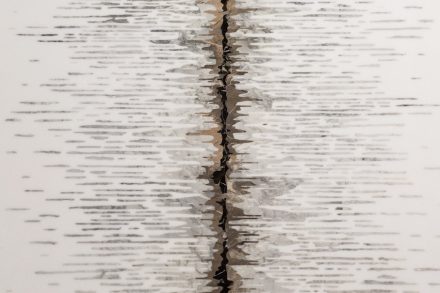 The cusp of this year’s Salone del Mobile, Milan (April 9th to 14th, 2019) was, from the point of view of natural stone, Italian-based Budri Company’s stand. Known to go to the edge of the horizon and beyond with their ideas, Budri demonstrated that marble, too, can be pushed beyond its limits.

„Marmor Natvm“ (Birth of Stone) was the theme as explained by Alessandra Malagoli, mastermind and head of the company, together with husband Gian Marco Budri.

„Divide and reassemble“ figuratively made the point.

What at first sounds simple, proved to be quite the challenge at Budri’s Salone Stand. 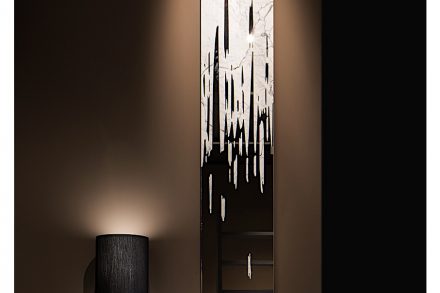 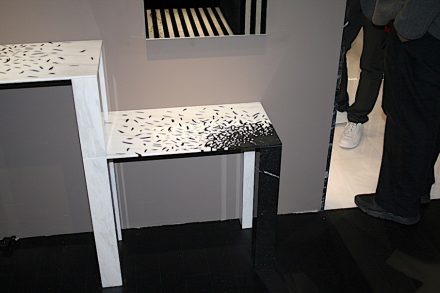 On display were a number of inlays, the like of which had never before been seen: Tabletops and consoles into which minute stone slivers had been integrated, or mirrors with integrated droplets of stone.

It is difficult to conceive, how the company specialists managed to work with the vast number and variety of slivers. But the fact that the enormously time-consuming work is necessarily reflected in the price, is obvious.

Of course, Budri’s target group is the class of very well-to-do clients. However, in contrast to other Italian manufacturers, Budri does not produce spectacular objects serving merely decorative purposes for showing off. The company concentrates on household items of the very special kind.

In the case of one table (see photos on top), inlay work was so complex and dainty that a steel plate is needed to support the marble puzzle. It took three weeks work from start to completion according to Allesandra Malagoli. 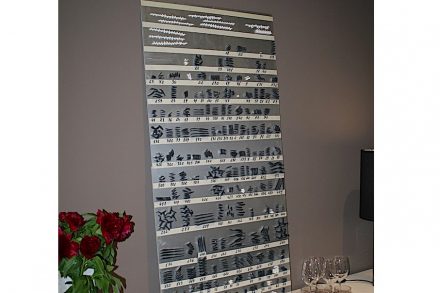 A special tidbit at the stand was a mural exhibit showing the shape of fragments used. Great! 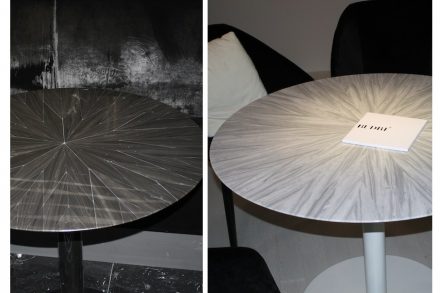 In the case of other tables, geometric shapes were assembled taking the structure of the stone into precise consideration. 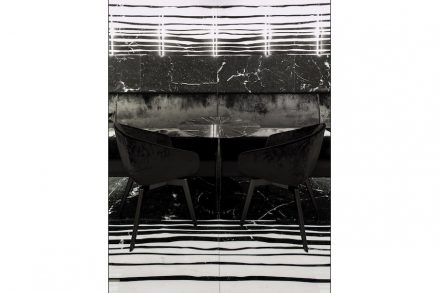 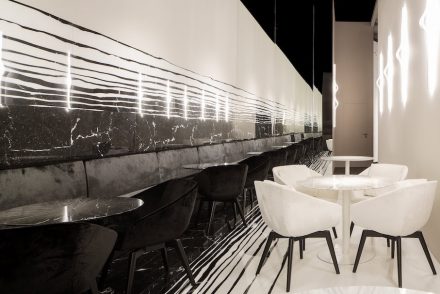 But that’s not all: one large wall at the stand was clad in white marble with black veins. Also the floor had that design. But what’s so special about it, one might ask.

Simple: the veins were actually inlay work and a natural stone not known in nature, so to say.

Is that necessary? Is it permissible?

These innovative inlays can only be explained from an artistic point of view. Budri produces art. And because the participants are top-notch artists, the objects also contain a message.

This time Budri – in cooperation with the Japanese-French designer Gwenael Nicolas – picked up 2 themes, both there for the taking. We give an interpretation:
* one is a new understanding of the old noble material. Up until recently, the desired object was extracted from the raw block. What was left over was waste. The work of the artist makes it tangible: in the end, all that is left of the raw block is a work of art amidst of a heap of fragments.

The current discussion is all about creating objects that beget other objects, thus saving raw material (and energy). The idea was propagated by industrial designer Raffaello Galiotto of Italy.

Budri is working on the theme from an artistic angle, reclaiming the waste to make something entirely new – a natural stone not known in nature.

* another theme is the competition afforded by engineered stone or quartz composites. There is heated discussion in the branch as to whether such material should be admissible at stone trade fairs.

Budri turns the discussion topsy-turvy by producing something obviously stone but made by man. Or put another way: engineered stone? Yes we can! 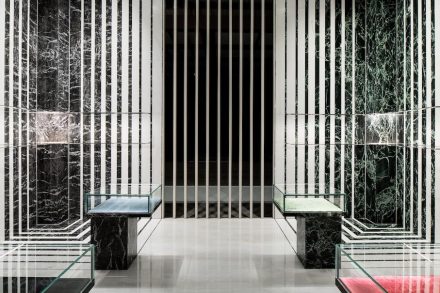 To round up, let us mention that the stand included a presentation of natural stone jewelry in an appropriately set sales room. 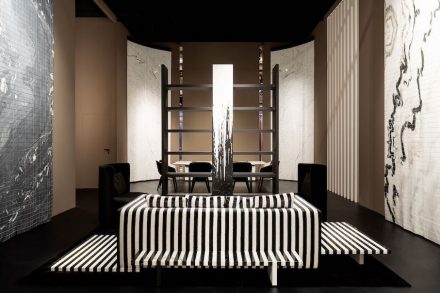 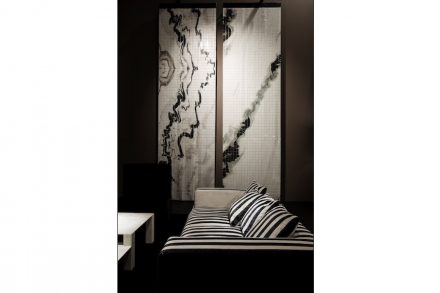