The Qatar National Library: the heritage collection will be displayed on a stage of travertine shelves 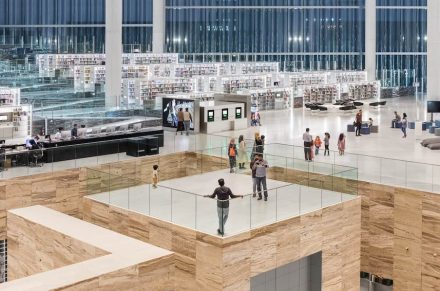 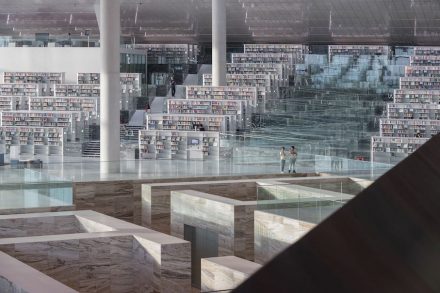 An „amphitheater for books“ is the term Rem Koolhaas uses in a video on the Qatar National Library (QNL). The vernacular leaves much room for speculation as to the building by the Dutch architect and Pritzker Award winner: Are books to be presented on an open stage? Or – change of perspective – is it here the books that sit on the ranks of the arena and look down on the ignorance of the visitors?

Koolhaas’ architecture invites questions, fantasies and the thirst for answers. But just that is the aim: with the National Library, the Sultanate of Qatar wanted to demonstrate once more that it is on the path to a modern scientific society. The wide-open inner space demonstrates the eternity of knowledge and freedom of thought for all to live and experience.

The preconception has a special role here. „We are but dwarves perched upon the shoulders of giants“ according to an ancient adage. The contribution of the pioneers is considered in a very special manner in the interior: The center of the atrium is home to the Heritage Collection, books and documents of particular importance to the history of the Emirates and for Islam. 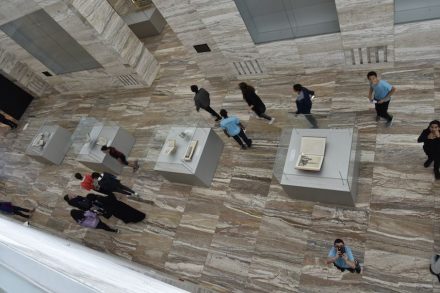 The implementation is almost theatrical. After all, we are in an arena: The Heritage Collection is mounted on a stage where beholders look, a if in a Roman theater, upon an archeological site on stage. The shelves in the pit are made of Travertine provided by the Dutch Solid Nature Company.

The dark pit stands in sharp contrast to the well-lit hall above. Daylight floods the room through windows; a special glass dampens the searing rays of the sun predominant in the Gulf State.

The white marble of the flooring also contributes to the light indoors and is repeated on the top of the shelves in the Heritage Collection. 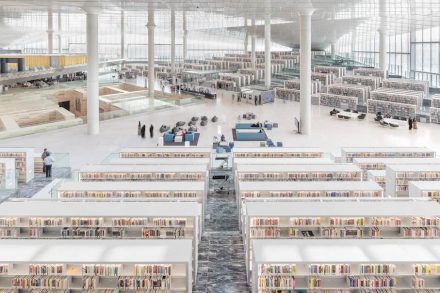 Together with the white aluminum shelves visitors gain the impression of pristine cleanliness. Knowledge is conveyed as an almost Godly virtue – whereby history has taught us that mankind has often enough turned this way of thinking into a vice. 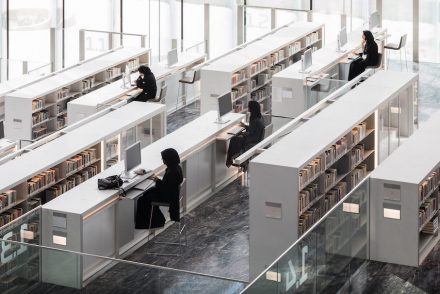 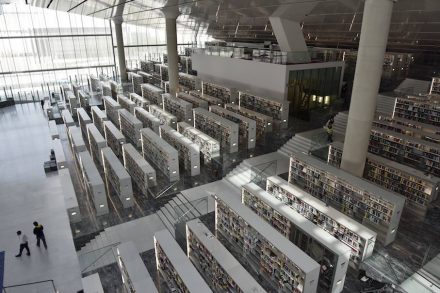 Perhaps the dark marble in the flooring between the shelves is meant as a warning.

Note: In a 21st century building, Koolhaas breaks a lance for the printed book. Even though the library has access to all the most modern digital sources and is itself busy digitalizing material, book remain a magical means of communication. Koolhaas describes in the press release how the fascination of the world of bound knowledge through the likes of the brothers Grimm and Illustrations by Gustave Doré was opened to him as a child.

The new library is meant to pave the international path for the desert state. Other activities according to a report are the TV-network Al Jazeera and the Soccer World Cup in 2022. 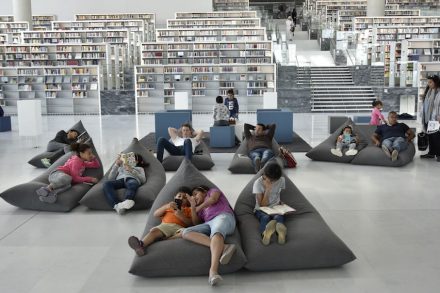 The Library will radiate deep into the country. A visit to the library was not the norm in every day Qatar writes Director of the Project Claudia Lux. That is why a section for children and youths belongs to the collection. An average of two events every day with presentations of music and art or scientific lectures were held in 2018 according to a report. The National Library at the same time functions as a municipal library of the capital Doha.

Finally, it is part of Education City. A new district with foreign Universities and cultural centers. Seen as such, it is a central Library.

The Qatar Foundation is the funding organ. The foundation is in the hand of the Government, i.e. of the Sultan. Chairwoman is Her Highness Seikha Moza bint Nasser. 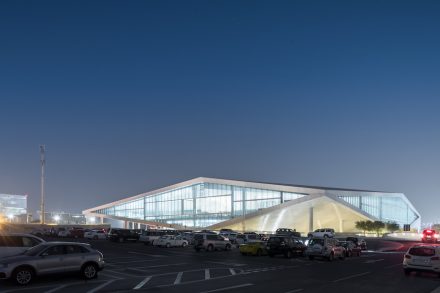 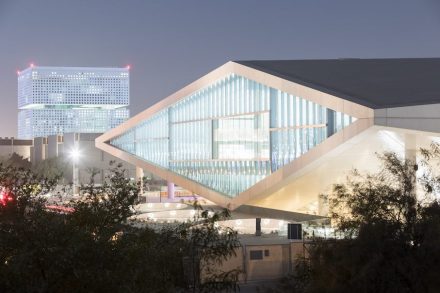