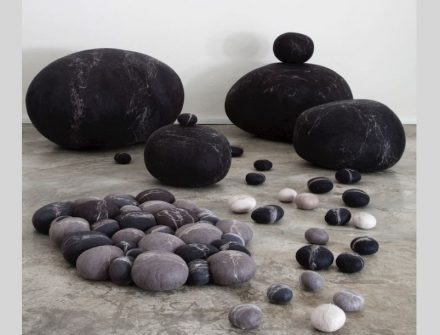 A natural stone pavilion will debut at StonExpo/Marmomac co-located with TISE fair in Las Vegas January 28–30, 2020.

Artist Paolo Franciulli lays out marble sculptures on the seafloor in front of the Tuscan coast to protect marine life from fishing. A few years ago, Greenpeace dumped boulders into the North Sea also as habitat for underwater life (1, 2).

Canada based Polycor company has announced the acquisition of Elliott Stone Company Inc.

A new mineral (KNbO3) was discovered in a South African diamond and named „Goldschmidtite“ in honor of acclaimed geochemist Victor Moritz Goldschmid. Scientists estimate that the mineral formed 170 km underneath the planet’s surface in the mantle.

Geologists uncovered the history of lost continent buried beneath Europe about 140 million years ago.

Royal Institute of British Architects (RIBA) warns that foreign architects are considering to leave the UK after Brexit. That might affect the stone sector: in the last years, some stone companies focused their marketing efforts on international architects’ studios in London doing projects in the Middle East.

The Praemium Imperiale is a global arts prize awarded annually by the Japan Art Association and often dubbed as „Nobel prize for the Arts“. Categories are Painting, Sculpture, Music, Theatre/Film and Architecture. New York-based Tod Williams & Billie Tsien were the 2019 winners in architecture (1, 2).

How to turn the Martian Regolith into a soil where plants can grow is one of the topics in the study „Feeding One Million People on Mars“ published in the magazine „New Space: The Journal of Space Entrepreneurship and Innovation“.

Video of the Month: Mount Bromo is an active volcano in Indonesia where tourists may walk on the crater rim. Drone filming of such walks is becoming popular.