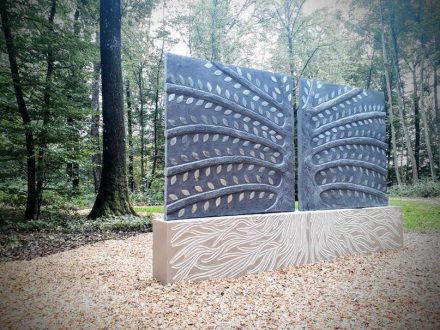 „Tree of Rest“ (Arbre de Repos) is the title French sculptress Elsa gave her slate walls located at the woodland cemetery in Olm (Kehlen), Grand Duchy of Luxembourg. The idea of the work is to depict death as a „returning to earth or ascending to heaven,” as she says. A tree bears both aspects.

In springtime this year, she had been invited to have on open workshop there and to create the sculpture during 5 weeks. The raw material was 2 slabs of Herbeumont slate. Each measured 150 x 175 x 10 cm with a weight of around 10 t.

During the open workshop, kids from school classes visited her to learn about sculpting and working with stone.

Elsa understands burials in woodland cemeteries as groundbreaking for an ecological funeral culture: used are biodegradable urns or the ash is dispersed on the site. „The precise place of the burial can be indicated either by a small plaque of only a few centimeters on a nearby tree or rock, or by a mention in the list at the entrance of the site,” is said in a Elsa’s release. No steles or plants and flowers are allowed except for the funeral ceremony.

Elsa is at home in southern France near the perfume town of Grasse. The subject of her artistic work is herbal motifs, mostly leaves in various forms. Her preferred material is slate, here the variety of Ardoise d’Herbeument. It is quarried in a city with the same name in nearby Belgium.