Marmomac 2019: Hardly a stand with the usual opulence 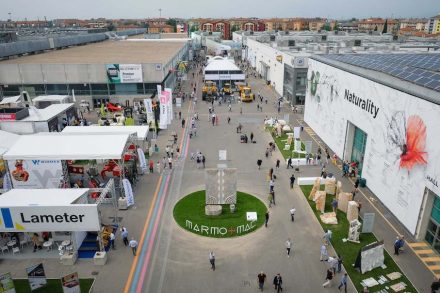 Is the Italian stone branch eating humble pie because of poor export stats and global uncertainty?

Veronafiere was untypically reticent while praising Marmomac’s success this year: The exhibitors (1650 from 61 countries) and visitors (69,000 from 154 countries) were mentioned but the comparison to last year’s numbers was omitted. Surprising since according to the numbers we have in our archive last year had shown only 68,000 visitors (but from 62 countries). The increase in visitors by 1000 could have been seen as a gain worth mentioning. The number of exhibitors stood at 1650 (compared to 1600 in 2018).

Mentioned was only that 62% of the visitors came from abroad.

We don’t wish to speculate on the numbers as such but instead pose the question: is the reticence a result of a general recession in Italy’s stone branch?

2018, after all, did not bode well. According to the Trade Organization Confindustria Marmomacchine there was negative growth compared to the very successful previous years. In the first half of 2019 exports of value-added products were down in value by (-)6.1%, raw materials, on the other hand, were up +3.0% according to Verona’s daily L’Arena.

Most of Italy’s show stands were humbly decorated. Note: the Italian stone branch is playing on home turf at Marmomac, but in other countries in the first half of ths year i.e. in Vitória (Brazil), Xiamen (China), and Izmir (Turkey), the local stone branches had put on the really big show.

Only in Hall 1 at the „Italian Stone Theatre“ did Italy’s stone branch come out of itself with the usual opulence. Note, however, that the show receives state support from the Italian Trade Agency (ICE).

„Naturalità“ (Naturalness) was the theme this time. We show the presentations in the Italian Stone Theatre only as pdf’s for download. Important projects will be subject of reports in the coming months.

Just a short comment on Italy’s self-presentation in Hall 1: whereas the theme „green” was so excessively presented at this year’s Cersaie trade fair in Bologna that one came out almost believing that ceramics are sustainable and eco-friendly products, the theme in Hall 1 was treated with artistic aloofness.

New at this year’s Marmomac (September 25-28, 2019) was the focus on Africa: 50 exhibitors came from the African continent as we heard at the opening ceremony. A well-known African designer, Hicham Lahlou was an invited speaker.

New, too, was the top-buyer and life-long-learning perks for „furniture design“ a first for the Marmomac Academy and one for which some 240 special invitations were sent out – above and beyond the usual buyers’ program: „Meet the Inspiration“ was the title of courses held on two matinee-sessions. For architects the agenda read „Designing with Natural Stone“.

For the first time Hall 1 also included start-ups with product ideas. Unfortunately, they were difficult to discover.

At the opening ceremony the Mayor of Verona announced that the old shunting yard between the Porta Nuova station and the Fair grounds would be rezoned giving a better access from the station with its high-speed trains to the fairground.

But the general mood at the opening was dire, so much so, that the daily L’Arena opened with the header „Marmomac, partenza con polemiche“ (Marmomac starts off with polemics) for the first day of the fair. By that, the paper was referring to the words of criticism which many speakers addressed at the new Government of Primeminister Conte, who failed to send a delegate to Verona, different from his predecessors.