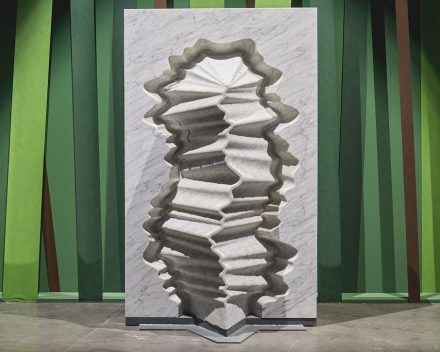 This time the choice falls on Nicolas Bertoux, „Diapason” (octave): 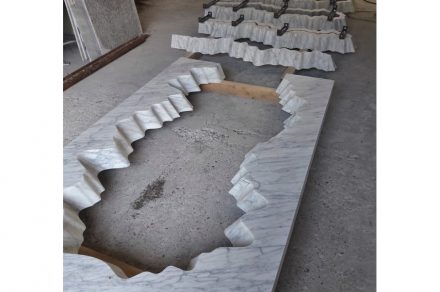 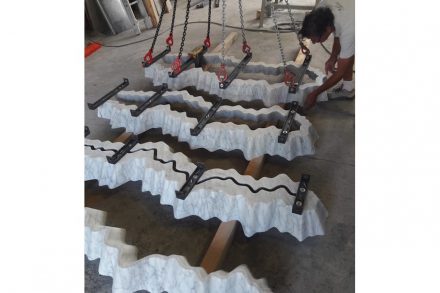 „This sculpture came into being from a single two-dimensional rectangular slab. Five sinuous, angled cuts were made in the slab – inspired by the altitude curves of topographic maps – generated by a numeric control water jet machine with 5 axes. This processing created 6 elements that were re-composed and assembled on top of each other, thereby creating a three-dimensional composition with a mountainous silhouette. 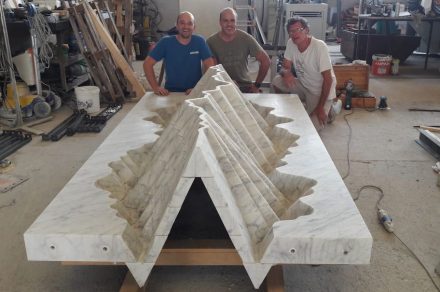 The overall composition is positioned vertically to create an imposing gateway effect recalling the monumental entrance to certain stone quarries.

Combinig these elements by no means seeks to hide the displacements of the surfaces but, rather, these movements exalt the richness of the material and the fluidity of the machining operation.” 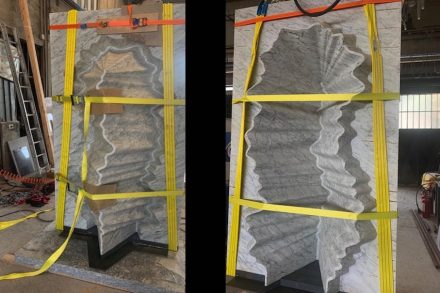 Nicolas Bertoux was born in France and began his career as an interior architect in Paris before focusing entirely on sculpture. His main goal is to integrate his works into the environment by taking inspiration from the space, culture, history and nature of the location. His monumental sculptures have been installed in France at the European Parliament in Strasbourg and in Ronchamp city centre. Other public art projects can be seen in Taiwan at the Taipei Transport Institute, the Kaohsiung Museum of Fine Arts and the Hsin Chu Cultural Centre, as well as Shanghai Corporate Avenue and the Beijing Olympic Park in China.

Together with Cynthia Saw he has founded die Fondazione Arkad located in Seravezza near Carrara in a former marble factory. There, courses for sculptors are offered as well as seminars about the future of sculpting. More than this, exhibitions and events are regularly held.