With the miniature installation „Iceberg”, Moreno Ratti implies that we use too much water 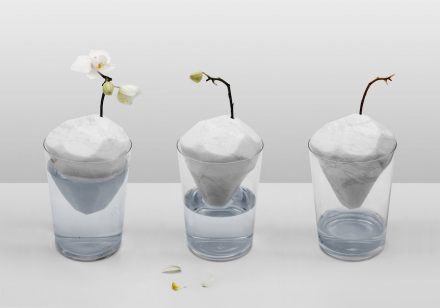 Moreno Ratti, a designer from the Carrara area, has often been involved in the environmental issues of the marble sector. He has used numerous examples to show how waste material from production can be used in new objects. In many cases he has also created functional sculptures: these are everyday objects that are unmistakably art objects, but at the same time can be put to good use.

But his current creation, called „Iceberg“, is about pure art, and here it is about art that makes a statement.

Ratti has transformed a small piece of Carrara marble into a form which could be interpreted as a floating iceberg. The stone is placed in a plain drinking glass filled with water. Because marble is porous, it absorbs water and thus provides the necessary moisture for a single stem stuck in a borehole in this very unusual marble vase.

The newspaper Corriere della Serra wrote „Put flowers in your glasses” and meant that with the help of the installation the viewer should question his view of the world: as the water level decreases, the plant inevitably approaches its death – Moreno wants to point out the „excessive use of water in marble processing”, as he himself writes about it.

The iceberg can be associated with the melting of the poles and the extinction of polar bears.

Ratti, who is closely connected with the marble industry and only works with the stone from the White Mountains, does not, however, make sweeping accusations. It is known that water from stone processing is treated and reused in the stone sector.

Rather, as in many previous works, he is more concerned with modesty and voluntary self-restraint as a guideline for modern consumption and business: „The plant shows what happens to us when we use more water than we should!”