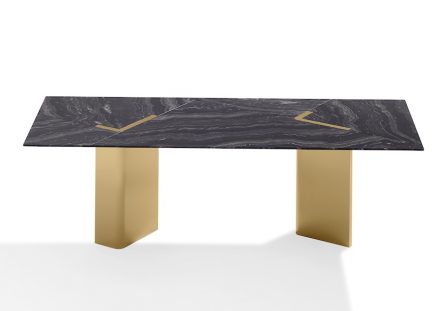 For the dining table „Kallisto”, a slab with a striking structure is cut and reassembled

No less than 3 important innovations for product design with natural stone were on display at the IMM Cologne trade fair in Cologne (January 13-19, 2020), and they were all to be found at one stand: Draenert, the German company specializing in exclusive furniture, mostly with stone, had invited the Greek designer Alexia Mintsouli – brand name: Alex Mint – to cooperate with them, and her new table „Kallisto” was shown at the furniture fair.

The 3 innovations concerned
* firstly, the creative use of the veins and structures which identify some types of stone,
* secondly, the importance of joints,
* thirdly, the limits the designer’s field of activity.

Firstly: Well-known and occasionally spectacular are the efforts to extend the veins in a stone, so to speak, by fitting similar pieces precisely or by book matching the whole structure in mirror image (bookmatch). 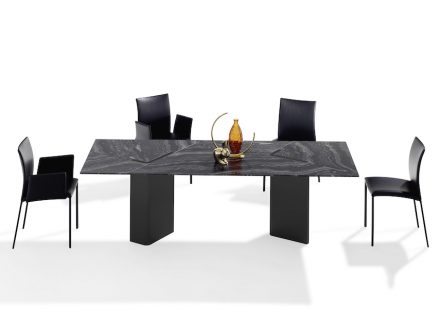 Alexia Mintsouli, however, took a completely different approach this time: she cut up a large stone slab with a striking structure and put the resulting geometric individual pieces together in a new way! 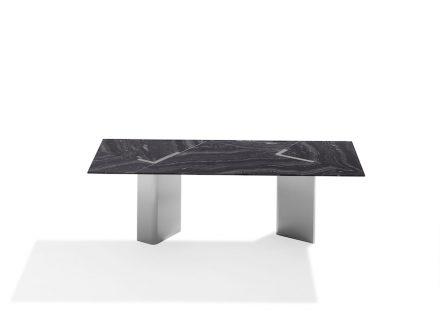 Because, secondly: you have to deal with the joints if you want to compose a new complete piece from the individual parts. While this is not a problem in the case of the reuse of waste pieces, for example, because one will try to make the joints as unobtrusive as possible, for Alexia Mintsouli it was exactly the opposite.

Because if her design was to be honest, she had to make the joints virtually stand out. Wy else – if not to set her own work apart from nature’s – would she have just snipped up the original piece? 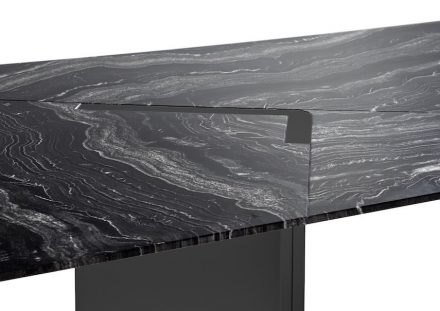 We have never seen the kind of joints as in „Kallisto” in any stone design: they are more than just present, but properly worked out

This also serves to ensure that crumbs on the table can simply be wiped away with a cloth.

Thirdly, the geometric pattern of how the individual pieces are re-composed remains in the designer’s hand. The customer can choose one of the approximately 180 types of stone that Draenert has in stock. But it is not arbitrary how the mosaic of the slab is designed.

Otherwise, it could have been left as nature intended in the original, or better: left as it is.

Here, after the design phase, the designer comes into play once again and with a new role: it is she who composes the final result of the tabletop. This is done on the computer, of course, and is presented to the customer before the final cutting and gluing together.

In the case of stones with wild grains, the customer could hardly produce a tasteful end result himself. 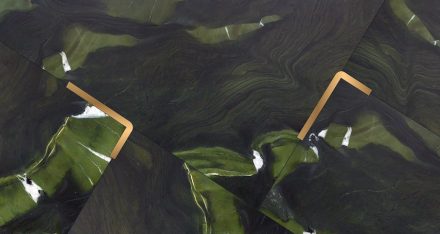 How do customers react to this completely new way of designing with natural stone? „They are very impressed,” Anette Pfeifer, the company’s press spokeswoman, told us. The proof: the first copy of Kallisto was already sold in the early afternoon of the first day of the fair.

We almost forgot to mention it: the table still has a visual treat, namely the hooks in the plate. They are made of the same material as the base but are not connected to the frame and serve merely decorative purpose.

Are they to be understood as Facebook-style Likes?