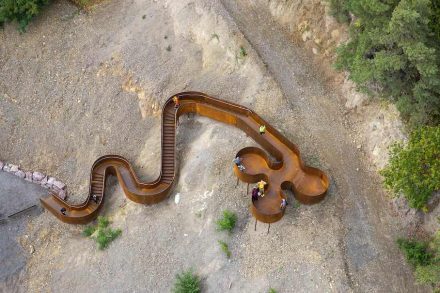 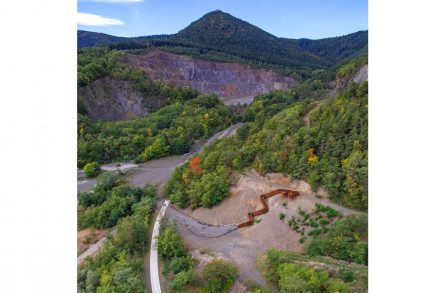 Since the summer of 2019, the „Chemin des Carrières” (quarry road) has been in operation in Alsace, France, between the towns of Saint-Nabor and Rosheim. It was designed by the architects of the Norwegian firm Reiulf Ramstad Architekter, who have done something very special: along the 11.5 km-path with 5 stops, they show the history of the landscape and the people – but the porphyry, which was once mined there and which is actually object of the exercise, is only mentioned en passant.

Since the times of Louis XIV, gravel quarrying in the proximity of Strasbourg was an important branch of industry. The characteristically hard and durable porphyry was transported all the way to Paris mainly for road construction.

At last there were 4 quarries in the area. Their production, for example for railway tracks, reached such dimensions in the 19th century that the towns of Saint-Nabor and Rosheim were connected by a railway line. This also served for the transport of people.

Porphyry mining was discontinued in 2002. From 2009 onwards, preparatory work began to secure the former factory premises. 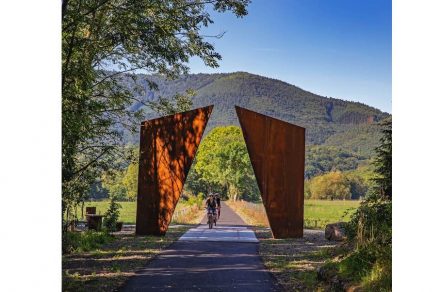 The Chemin des Carrières now connects them and offers plenty of opportunities to stop at 5 stations, so that one can look far into the countryside or mentally back in time.

Some installations worth seeing are made of Corten steel at the stops. This is the type of iron that takes on a natural rust patina but then does not continue to rust.

The labyrinthine sculpture near Rosheim, where the end point of the railway line used to be, has a correspondingly heavy industry atmosphere.

The staircase near Saint-Nabor, on which one can reach the viewpoint in the shape of a cloverleaf (photos at the top), also appears heavy and massive. 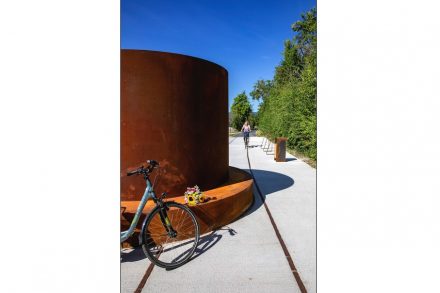 The Chemin follows the former railway line, so one never totally forgets the stone. It appears as the bed of the railway track and lies around everywhere near the former quarries.

A prominent point in the surroundings is the mountain Sainte Odile, already located at the edge of the Vosges mountains. 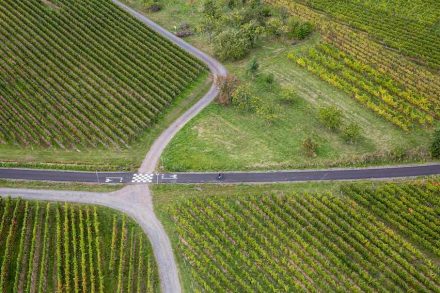