Exhibition at the North Carolina Museum of Art: „Bacchus Conservation Project: The Story of a Sculpture” 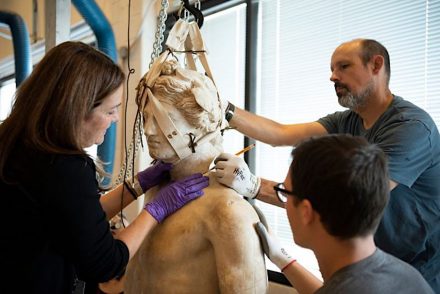 The Statue of Bacchus, which has undergone extensive research since the 1960s when the North Carolina Museum of Art realized it was a patchwork of marble fragments, returns on view in the special exhibition „Bacchus Conservation Project: The Story of a Sculpture”. Open until September 27, 2020, the show explores the history of the sculpture, the scientific investigation, the conservation process with a focus on the making of its new arm. The exhibition also includes a series of related events, including a free Family Day, a scholarly panel, and a wine-tasting event.

Academic interest in the statue began in the 1960s when classical scholars realized the sculpture was a patchwork comprising a rare 2nd-century Roman torso, a head from a different ancient sculpture, and limbs, hair locks, berries, and leaves that were added later. The removal of the head 30 years ago initiated a derestoration process, but the treatment was not initially intended to extend to the rest of the sculpture.

Recent research, structural analysis, and materials analysis, however, led the Bacchus project team to reconsider the original plan. The team’s scientific, conservation, and curatorial data showed that Bacchus contains more fragments from ancient quarries than previously thought and that displaying each fragment separately did not make curatorial sense. Together, though, these ancient fragments create a wonderful statue of the Roman god of wine. 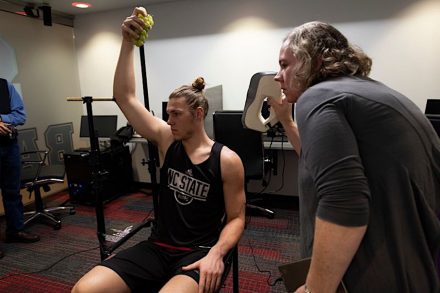 Reusing the fragments for a re-creation posed a serious structural integrity risk, but putting the statue together again was feasible,” said Caroline Rocheleau, NCMA curator of ancient art. „So instead, we opted for a re-restoration of Bacchus.”

In addition to creating a new arm for the statue, the new conservation treatment has returned the statue to its 1960s appearance, reattaching the head to the body.

The exhibition also features a marble touch station where visitors can learn about the different types of marble in the statue; a „build your own god” interactive station to customize a new Roman god; and the Story of Bacchus digital interactive, where visitors can explore the statue’s history and the far-flung origins of its marble pieces.

An additional way to explore the statue is through a 360-degree video. Created as a form of digital outreach for high school students, the immersive experience includes an exploration of the Bacchus research and the NCMA’s conservation lab.