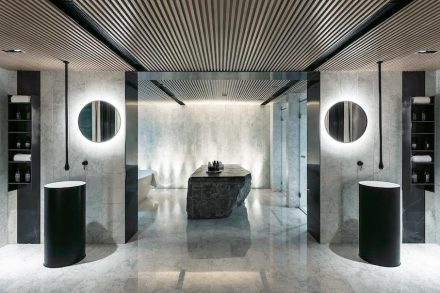 The interior decoration of an exclusive show flat in Beijing with natural stone and wood was bestowed one of the Red Dot Awards 2019. Also the Engineered Stone Mar del Plata by Neolith won a prize (1, 2).

For the London Design Week 2019, Cosentino had initiated a Carved in Stone Competition where architecture studios across the UK were invited to develop marble sculptures around the theme „Life on Mars“. The idea was to juxtapose the ancient material with a futuristic brief. Cuellar Stone company realized the 5 winner objects out of 50 x 50 x 50 cm blocks of Macael marble.

Holds made of natural stone for climbing or bouldering in artificial walls are produced by German Stoned company.

French President Emanuel Macron is mandating that all new public buildings in France financed by the government must contain at least 50% wood or other organic materials starting in 2022.

The Swiss Natural Stone Association NVS has published a revised version of its study on the use of natural stone in thermal and wellness baths (German).

High school students from the Rutland area in Vermont took part in a free, one-day marble carving workshop at the Carving Studio and Sculpture Center, learning about their community’s history and keeping this local tradition alive. The story of the once flourishing stone industry there is told along Vermont Marble Trail (1, 2).

A Study from Algeria showed that milled marble waste can be used to substitute sand as aggregate for mortar.

At the new Midfield Terminal in Abu Dhabi which is under construction 325,000 square meters of natural stone flooring will be installed. In Dubai, 90 km away, another new super-airport in being built.

The Kuril-Kamchatka Trench had been considered one of the 5 deepest trenches on the planet with depths over 10,000 m. But it only reaches 9604 m which is almost 1000 m shallower than thought before, as measurements by multibeam echosounder have shown. More than 10 km reach only the Mariana Trench, the Tonga Trench, the Philippine Trench and the Kermadec Trench. For comparison: Mount Everest in the Himalayas soars 8848 m in the sky.

Video of month: The few records that exist of the Roman city of Neapolis mention that it was once a major commercial port. But no evidence of a harbor was ever found – until a major storm struck the Mediterranean coast in 2013.