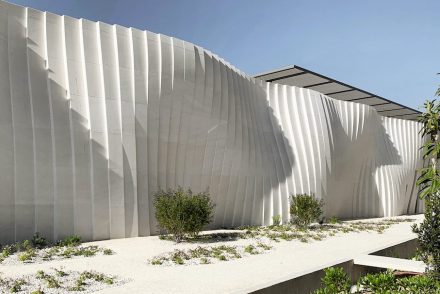 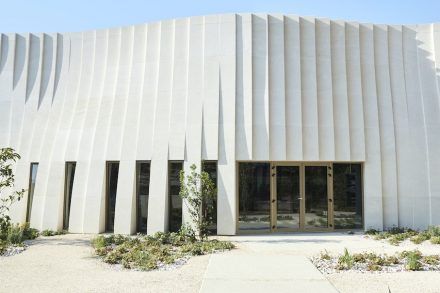 France has a great tradition in building with solid stone, i.e. with small blocks that are assembled to fit perfectly, and a current project is literally playing grand theatre with it: it is the new building for the winery Maison Delas Frères in the small town of Tain-l’Hermitage in the Rhône Valley in France (Département Drôme). The project was awarded one of the French prizes for natural stone architecture of the year 2019.

The building is a grand theatre in that it has placed a conspicuous corporate architecture in the tranquil vineyard nest, and because this architecture looks like a monumental stage curtain that has perhaps just been drawn and still resonates a little after a big performance.

This wall is 80.5 m long, between 6.90 and 8.10 m high (because there is a slope in the terrain), and is composed of 303 massive sandstone blocks (measuring approximately 2 m high x 1.10 m wide x 55 cm thick). On one side it delimits the new buildings of the winery with the tanks and the sales room, which are located behind an additional glass wall. At the same time, it protects the entire complex from direct sunlight. 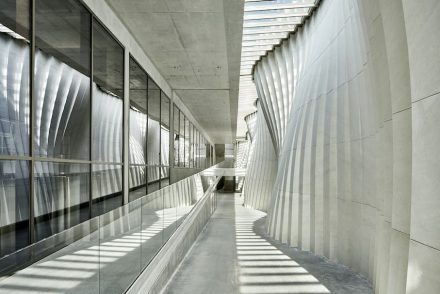 The stone with its large mass functions here as a bulwark against heat or cold from outside. 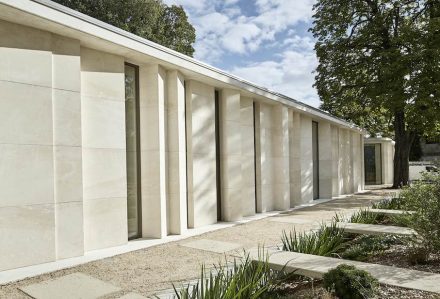 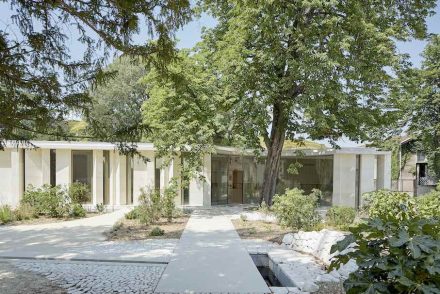 On the other side, the outer wall is therefore also made of stone. Here, however, it is a matter of simple pillars to which the massive blocks are stacked. On this side, everything is rectangular and indicates movement at best in the staggered arrangement of the pillars, while on the other side, with the theatre curtain, everything is unmistakably round and vibrating. 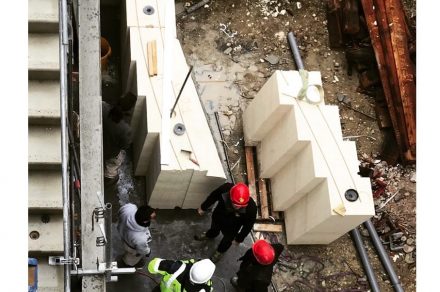 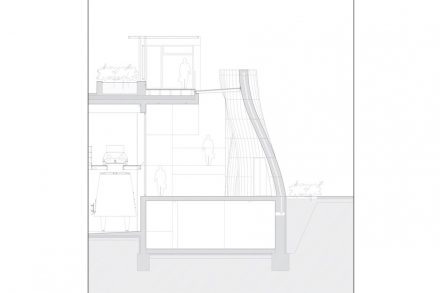 What is not visible from the outside are the steel cables that provide stability inside the curtain. The thick cables that run from top to bottom and are anchored in the foundation. Since they are tightened with about 10 tons of tension, they need to be inserted into metal sleeves. Otherwise they could break the stone in some places.

Steel cables also run through the wall in a transverse direction. However, they are much thinner.

With such a construction and the many preparatory calculations one thinks of great costs. Not least because it is a luxury class building, with which Deutz-Delas Frères, famous champagne brand and winery, had a recognizable trademark built.

But if one compares the costs with usual construction methods, the entire plant is 30-40% below what the client would have paid for it in reinforced concrete.

This is where numerous qualities come into play that distinguish the stone as a building material:
* since every block here has its own geometry, the costs would skyrocket if you had to make 303 different moulds for the blocks; cutting the stone to size with modern wire saws is cheaper and also much faster;
* in addition, the natural stone also has four times better values from the point of view of energy consumption and CO2 release compared to reinforced concrete;
* last but not least, the stone gives architecture a special elegance – it will be interesting to see how the whole thing will look when time has covered it with patina. 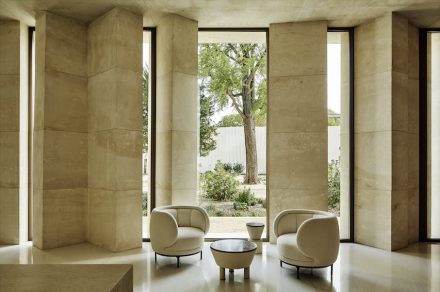 The demands on all those involved were great. For example, a special rotating table had to be developed for cutting the blocks to size, and drilling the guides for the ropes through the individual blocks also required special know-how.

The accuracy when sawing the blocks was +/- 1 mm, and over the entire length of the wall the deviation does not exceed 1 cm.

The steel cables can be retightened or replaced without having to tear down the entire wall.

There were experts at work, the French trade journal Pierre Actual sums up in its detailed description (9/2018) and cheers: „Crazy! Unique!”

The sandstone Pierre des Estaillades, which is extracted in quarries downstream, was used. 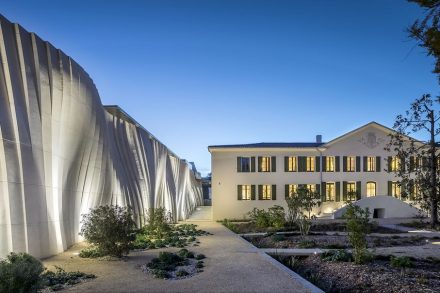 The complex also includes a historic manor house, which has been converted into guest rooms and as a venue for wine tasting. It can optically assert itself against the sheer mass of the stone curtain.

By the way, the entire plant is designed to be earthquake-proof. 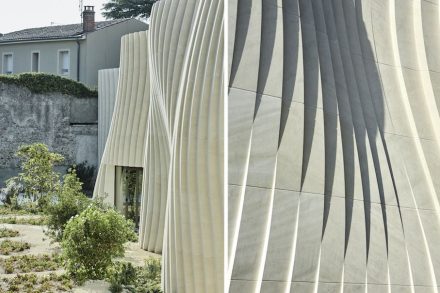 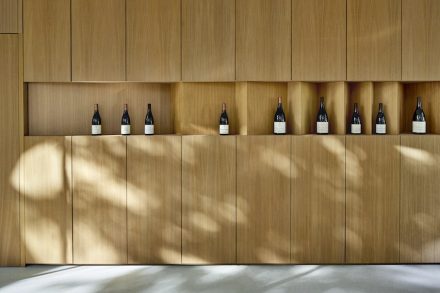 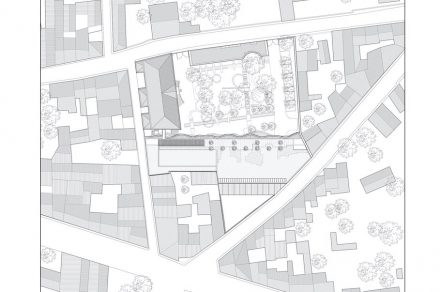