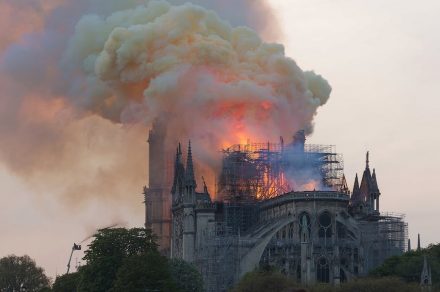 On April 15, 2020, the fire disaster almost destroyed Notre-Dame in Paris. In a detailed article, Science magazine has gathered expert information on the cathedral’s limestone and on possible damage as well as on renovation. The report also discusses other impacts of the inferno.

Italy’s exports of natural stone slabs and finished products decreased 2019 by (-)7% compared to the previous year. To the USA: (-)7.9%, to Germany: (+)4.3%, to Switzerland: (+)2.4%. As a result of the uncertainties around Brexit there was (-)24.5% to the United Kingdom. Exports of machinery and tools were (-)2.8%. The figures were published on the LinkedIn account of Flavio Marabelli, honorary president of Confindustria Marmomacchine.

Cosentino has launched its C-Top online-magazine.

The 6 soapstone bird carvings which had been stolen from the ruins of Great Zimbabwe have now returned to the pre-colonial stone complex. They are national symbols and figure on banknotes, the country’s flag or documents. The Guardian had reported about the Plundering of Great Zimbabwe in the past (1, 2).

Sculptor John Bizas with Greek origin has sold 2 of his marble sharks for a private collection on a 95-m-superyacht (1, 2).

A brochure about the All India Stone Architecture Awards 2020 (AISAA) can be downloaded from the webpage of the Center for the Development of Stone (CDOS).

„In Praise of Cemeteries” is the title of an essay published on Common Edge.

The Geological Society of America’s Foundation (GSAF) has Dr. Christopher Grant Maples as new president. He follows Dr. John W. Hess who had been in charge since 2015.

Video of the month: all that is to be said about the sealing (impregnating) of kitchen countertops is said by Vermont Quarries in 35 seconds.