Thanks to its quartzites, Brazil seems to be coming out of the valley of tears for the first time since 2013 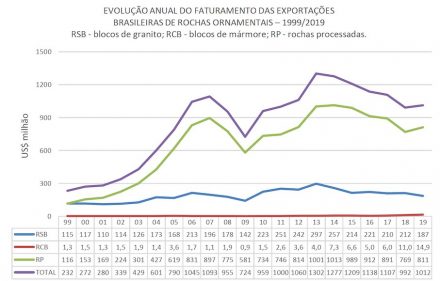 The country’s stone industry recorded an increase in exports of almost (+)2% in 2019, while Brazil’s total exports fell by (-)6.8%

At a time when economies around the world are in the red due to the corona crisis, reviews of past years seem like yesterday’s news. For the sake of completeness, we nevertheless want to provide these statistics – this time those of Brazil’s natural stone branch supplied by the country’s association Abirochas (Associação Brasileira da Indústria de Rochas Ornamentais. See below data for the first trimester 2020):

Is Brazil’s natural stone industry coming out of the valley of tears in which it has been trapped since 2013? In 2019 there was an increase in export earnings by (+)1.94% for the first time again! At first glance, this figure does not look exhilarating, but: on the one hand, Brazil’s stone exports are at a level where great leaps are hardly possible and on the other hand, the country has again passed the magic mark of US-$ 1 billion (US-$ 1,012,059.91), below which it last fell (see table above).

The fact that, at the same time, exports by tonnage have fallen (by -1.97% to 2.15 million tonnes) means that Brazil’s stone companies have been able to sell their goods on average at better prices than in previous years.

These are the figures from the current statistics of the nationwide Brazilian stone association Abirochas. They were compiled by the consultancy firm Kistemann & Chiodi Assessoria e Projetos.

Perhaps even that the country is now finally succeeding in achieving a unique position on the world market with its wealth of natural resources. The current bestseller is quartzite, with which a remarkable average price of US$ 2000 per tonne is consistently achieved. Brazil has a great variety of quartzites, especially in its northern states.

Let’s remember: about 10 years ago Brazil had already once aimed for a unique position on the world market, namely with the so-called Exóticos. These are types of stone with the colours and structures of marble and the hardness of granite. However, these efforts did not lead to success at that time, and the reason was homemade mistakes: because in the field of ceramics today it is clear that there is a demand for exotic natural stone decor, and Brazil’s exotics can certainly be found on the market, but via the detours of other countries.

Chiodi notes the current figures with satisfaction, also because Brazil’s total exports across all sectors had fallen by a significant (-)6.8% in 2019.

Seldom does one read from him such explicit praise for the domestic stone industry as in the current statistics: „Once again, Brazilian entrepreneurs have mastered the difficult structural and economic situation and made the most of the opportunities offered by their quartzites and marbles on the US market”.

Chiodi attributes the fact that after a phenomenal rise in the first quarter of 2019 (we have reported, link see below) exports had fallen significantly again by the end of the year to the fact that the effects of Donald Trump’s trade war against China had subsided. China is now bringing its goods to the US via third countries, as the press reported.

Imports of artificial stones (engineered stone, quartz composites) were worth US$ 44.9 million (+1.1%).

Brazil, on the other hand, is becoming increasingly strong in exports of artificial stones: Its manufacturers have recently already reached US$ 10.4 million (12,750 t) here. The increase by value was even +176.6% and by quantity +91.4%. Here, too, the USA was the main customer with 73.5% by value. There were also sales to 5 South American countries.