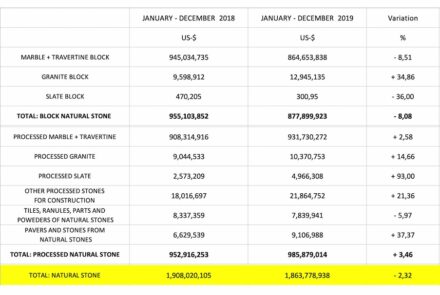 At a time when economies around the world are in the red due to the corona crisis, reviews of past years seem like yesterday’s news. For the sake of completeness, we nevertheless want to provide these statistics – this time those of the Turkish natural stone industry, which the IMIB (Istanbul Mineral Exporters’ Association) has provided us with:

However, it remains questionable whether this really reflects a change in the Turkish current account. Presumably, the reduction of raw stone produced was simply since China, the largest customer, had again significantly reduced its purchases.

The figures in the Turkish trade press are commented almost traumatically: once again, the target of US$ 2 billion in natural stone exports was not reached, they complain. It had taken the hurdle for the last time in 2017.

However, this figure does not say much in terms of quality: far more information is contained in the sales value achieved per ton. 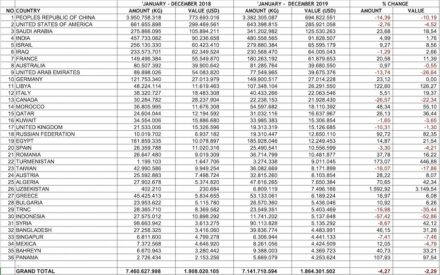 Let us look at the export statistics by target country. The ranking of customers is largely unchanged compared to previous years, except for India, which has been moving forward continuously.

In addition to the major customer USA, Turkey has gained good market shares not only in the countries of the Middle East. The differences from year to year do not indicate a loss of shares, but rather the completion of individual major projects in the target countries.

Particular attention should be paid to the fact that Turkey is consistently expanding its sales in the -tan countries, i.e. the states in the east of the former Soviet Union. Although sales to these countries have been low to date and vary greatly from year to year, they are still growing.

However, these markets are promising: the countries there are only at the beginning of their economic development, and China is already in the process of establishing itself as a trading partner with its One Belt, One Road initiative.

For the natural stone industry, this means that those who do not show up there in the medium term will only be able to sell their stones there in future via China. South Korea and Japan are examples that are already firmly in the hands of Chinese suppliers.