Does the subduction of tectonic plates accelerate before major earthquakes? 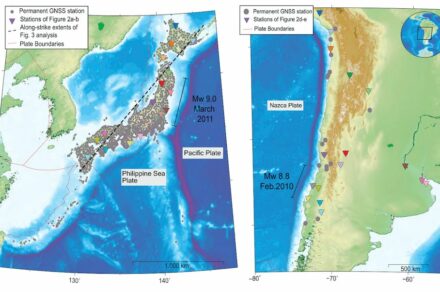 Before the event followed by the Fukushima tsunami, the direction of the Earth crust’s movement had even been reversed for a short time

A strange reversal of ground motion preceded two of the largest earthquakes in newer history. This is the result of a new study by scientists for Germany, Chile, and USA, in which they investigated signals recorded in Chile and Japan capturing the movement of GNSS stations before the great Maule quake in 2010 (magnitude 8.8) and the Tohoku-oki earthquake in 2011 (magnitude 9.0) which led to a devastating tsunami and the Fukushima nuclear meltdown. The findings are published in the scientific journal Nature.

Using state of the art geodetic analyses, the team reports a 1000 km-scale region of the Earth’s surface close to the plate boundary alternating its sense of motion over a period of several months directly leading up to both earthquakes.

Both events occurred at the Pacific rim, where oceanic plates dive beneath the continental crust in a process called subduction. In Japan, a dense network of permanent stations is tracked by global navigational satellite systems (GNSS) with high precision so that researchers can observe how fast and in which direction the ground is moving. In Chile, the network is not as dense but still tracks most of the deforming continental plate.

Normally, the stations on land move away ever so slightly from the subduction trench as the continental crust is squeezed and thus shortened. However, studying the time series of GNSS signals, the researchers found a reversal of direction: Suddenly, the stations moved towards the subduction trench, i.e., towards the open ocean, and then again reversed their direction back to their normal movement.

Very shortly after this second reversal, the underground ruptured, and the immense earthquakes occurred.

Aided by simple models and the best-known geological constraints, the authors propose that these reversals capture periods of enhanced pulling caused by rapid, densifying compositional changes in the oceanic plate as it subducts. Accordingly, it is suggested that these periods of enhanced tugging accelerated the inevitable failure at the shallower, frictionally-stuck segments of the subduction zone. 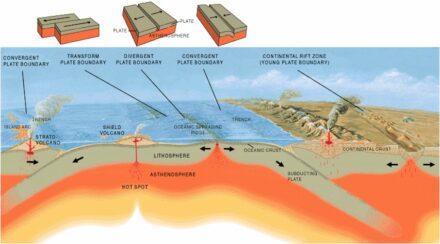 Jonathan Bedford from GFZ GeoForschungsZentrum Potsdam, Helmholtz Centre, and member of the study-group explains: “It is a common assumption that deeper subduction proceeds at a fairly constant speed in between large earthquakes. Our study shows that this assumption is an oversimplification. In fact, its variability might be a key factor in understanding how the largest earthquakes nucleate.”

Whether or not such strong reversals will occur before the next great earthquake remains to be seen, but what is clear from this study is that subduction zones are much more dynamic on the observable timescale than previously thought.