New light into the recent evolution of the African rift valley 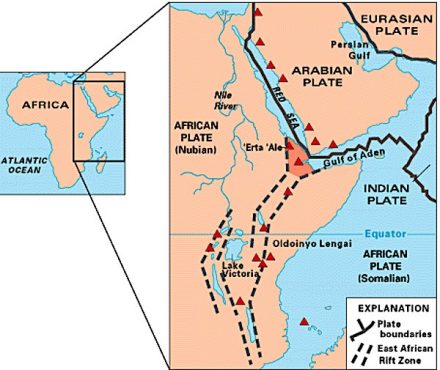 Continental rift valleys are huge fractures on the surface of our planet that progressively break continental plates with the eventual development of new oceans. The African rift valley between Ethiopia and Kenia is a classical example of this geodynamic process. There, volcanism, earthquakes, and fracturing of the Earth’s surface result from the enormous forces that tear the eastern portion of the African continent apart.

This system of linear valleys, that extends for thousands of kilometers from Syria through the valley of the Jordan river, the Gulf of Aqaba and the Red Sea until Mosambik,
is believed to result from the growth and propagation of isolated rift segments that evolve into a continuous zone of deformation.

However, although instrumental in driving climate and biosphere of that region which in turn may have influenced habitats and the pattern of migration of human species in East Africa, and possibly even conditioned hominin evolution, this process is poorly documented and understood.

In a study funded by the National Geographic Society, an international group of scientists from universities and research institutions from Ethiopia, France, Germany, Italy, New Zealand and the United Kingdom has shed new light into the recent evolution of the African rift valley.

Its focus was on the spatial and temporal sequence of the propagation, interaction and linking of the Ethiopian rift section with the Kenyan part of the rift fracture. By conducting fieldwork in a remote area at the border between Ethiopia and Kenya, and integrating the results of that field campaign with laboratory analysis of volcanic rocks, analysis of the seismicity, morphology and numerical modelling, the authors have been able to reconstruct the geological history of an almost unknown sector of the African rift valley: the Ririba rift in South Ethiopia.

The scientists showed that the Ririba trench formed about 3.7 million years ago as the southernmost advance of the Ethiopian rift segment.

In contrast with previous theories of rifting in the region, the new data indicate that the southward growth was short-lived and aborted around 2.5 million years ago. At this time, deformation migrated westward into the Lake Turkana region, where the Ethiopian and Kenyan sectors of the rift valley are now directly connected.

A later phase of volcanism, expressed by numerous lava flows and impressive explosive volcanic craters (maars), have since affected the Ririba area; however, this volcanic activity was unrelated to tectonic activity, opening new questions on how volcanism and faulting interact during rifting.

Overall, the results of this work provide new insights into the break-up of continents: „In the East African rift, we can observe processes that are important far beyond the region,“ says Sascha Brune from the GFZ German Research Centre for Geosciences who was a memeber of the international group. „The same dynamics that determine the rift development in East Africa led to the opening of the Atlantic and Indian Oceans many millions of years ago and thus had a decisive influence on the face of the Earth.“