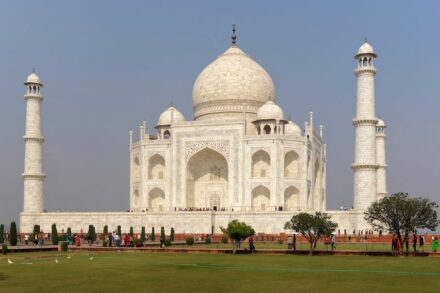 A tropical thunderstorm has once again caused damage to the Taj Mahal in India. On Friday last week (May 29, local time), winds of more than 120 kilometers per hour raged, and lightning struck the World Heritage Site on the outskirts of Agra city. According to the local press, this time, part of the marble railing on the roof on the side facing the Yamuna River was torn away.

There had also been damage to the sandstone. The BBC reports that two minarets were demolished, among others.

There was further damage to the wooden main entrance.

A total of 3 people died in the storm in the area. Numerous trees were uprooted and fell on cars.

Thunderstorms had already caused similar damage to the Taj Mahal in April and May 2018.

Recently there were reports that the white marble was yellowing as a result of environmental pollution in the surrounding area.

The Taj Mahal is one of India’s major tourist attractions and a unique example of Mughal architecture. Emperor Shah Jahan built it as a mausoleum for his wife Mumtaz Mahal, who died giving birth in 1631.