After the assassination of Caesar, a volcanic eruption in Alaska caused a worldwide weather anomaly which contributed to the end of the Roman Republic 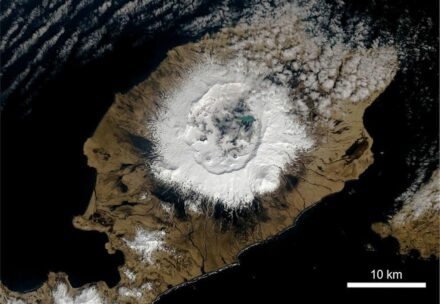 For a few years, there were crop failures, famine, and disease exacerbating social unrest and around the Mediterranean

A volcanic eruption in 43 BC may have contributed to the fall of the Roman Republic. The big surprise: it was the volcano Okmok, which at that time caused the weather anomalies in the Mediterranean region, und is located in Alaska.

In the time around Julius Caesar’s death in 44 BC, as can be read in historical sources, it was unusually cold. In the Mediterranean region, there were failed harvests, famines, epidemics, and unrest. Historians have long suspected that a volcanic eruption was to blame for this weather anomaly, but when and where such an eruption had occurred and how strong it was could not be determined.

Now, however, a study published in the journal “Proceedings of the National Academy of Sciences” (PNAS) gives answers to these questions: at the beginning of the year 43 BC, the volcano Okmok on the Aleutian Islands off Alaska erupted in a massive explosion. The event ejected sulfurous gases and ash over 30 km into the atmosphere, leaving a crater of 10 km in diameter.

The consequences were global. Tiny droplets of sulphuric acid remained in the atmosphere for over 2 years – and caused one of the coldest phases in the northern hemisphere in the past 2500 years.

A team of scientists from 6 countries came across corresponding evidence in an ice core from Greenland. Geochemical analyses of the ashes frozen in the ice show beyond doubt the fingerprint of the Okmok volcano in Alaska and made it possible to simulate the event in the computer.

According to these simulations, in the northern hemisphere in the summer and autumn of the years 43 and 42 BC, the average temperature was 3 degrees Celsius lower than usual and possibly up to 7 degrees down. All of southern Europe was extremely humid: Summer precipitation was between 50 and 120 percent higher than usual, and in autumn, it even rained four times as much as usual.

The population suffered from these weather extremes and also the armies of Caesar’s murderers and his followers, who were fighting each other in a bloody civil war. The ancient historian Plutarch reported in detail.

The volcanic eruption was equally severe for the north of Africa. There, the summer monsoon shifted to the south, and in Egypt, the annual flood of the Nile did not appear. This had a devastating effect on grain production: Historical sources report food shortages and famine, which prevented Queen Cleopatra from supplying Italy with much-needed grain.

As a result, Egypt saw the decline of the Ptolemaic kingdom.

In Rome, stable conditions did not return until the Imperial Period when the city became a world power.
The Antiquity was actually a warm period. The Alpine passes were free of snow, which helped Hannibal in his attack on Rome with elephants. Later Caesar was able to conquer the new province of Gaul. North Africa had a strong agricultural economy from where Rome obtained its grain.

Emperor Augustus was the first ruler of the new epoch. He turned the Rome of wooden buildings into a metropolis in marble.