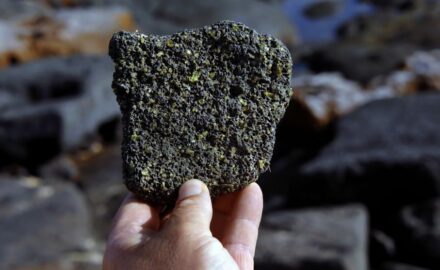 Weathering of huge amounts of tiny rocks could be a means to reduce the greenhouse gases in the atmosphere. While this is normally a slow natural process during which minerals chemically bind CO2, technological upscaling could make this relevant for so-called negative emissions to help limit climate risks. Yet, the CO2 reduction potential is limited and would require strong CO2 pricing to become economically feasible, according to the first comprehensive assessment of costs and possibilities now published in the journal Environmental Research Letters.

The assessment shows that enhanced weathering especially of basalt rocks could be an attractive option to support climate change mitigation, especially for tropical and subtropical regions, where the CO2 uptake potential is the highest. Yet, given the costs and the mass of rocks that would need to be moved, it can likely provide only a small additional contribution.

The aim of the study was to estimate the economic efficiency of accelerated weathering for climate protection. Mining and grinding as well as transport and distribution were factored in. “Our calculations show that enhanced weathering could be competitive already at 60 US-dollars per ton of CO2 removed for dunite, but only at 200 US-dollars per ton of CO2 removed for basalt,” says Strefler. “This is roughly double of the carbon prices discussed in the current political debate, and substantially more than cost estimates for afforestation which are at 24 Euros per ton of CO2 removed. This is of course an important obstacle for any future implementation of enhanced weathering.”

Strategies of carbon dioxide removal come with trade-offs. Planting huge numbers of trees to suck CO2 out of the air and store it in their trunks and branches for instance can come at the expense of land needed for food production. Also, carbon capture and underground storage (CCS) on an industrial scale is not accepted as safe by large parts of the population. Enhanced weathering, the spreading of rock material on land, may be easier to realize. However, dunite – the rock type most discussed amongst experts – contains harmful substances, such as chromium or nickel, that could get released during the process. This is why for the present study dunite is an important benchmark, but the researchers focus on basalt as a more sustainable option.

Current CO2 emissions are around 40 billion tons a year; natural weathering absorbs roughly 1.1 billion tons. Enhanced weathering could remove up to 4.9 billion tons per year if basalt is used, and up to 95 billion tons for dunite, according to the scientists’ calculations. It is likely, however, that in practice and considering all trade-offs, only a fraction of this potential could be realized. The best suited locations are warm and humid regions, particularly in India, Brazil, South East Asia, and China, where almost three quarters of the global potential could be realized. This is substantial, yet the uncertainties involved are also substantial, the scientists stress.

“The annual potential of CO2 consumption is defined by the grain size and the weathering rate of the rocks used,” says Thorben Amann from Universität Hamburg’s Institute for Geology, Center for Earth System Research and Sustainability (CEN), he is also lead-author of the study. To sequester one billion tons of CO2, more than 3 billion tons basalt would have to be spread, a mindboggling amount equal to almost half of the current global coal production. Grinding the rocks and spreading the powder over roughly one fifth of global cropland would be necessary, which is believed to be feasible, but – due to the gigantic amount of rocks involved – the costs eventually add up.

“We can say that Enhanced Weathering is not just a crazy idea but could actually help climate policy, yet it is still a challenge to get a precise understanding of the involved processes,” says Amann. “After all, there will be impacts on the agricultural soils, their properties will change, but this can also be beneficial. Basalt, for example, can actually supply certain nutrients to soils, acting as a natural fertilizer.”