Turning carbon from CO2 into solid material at an unbelievable rate 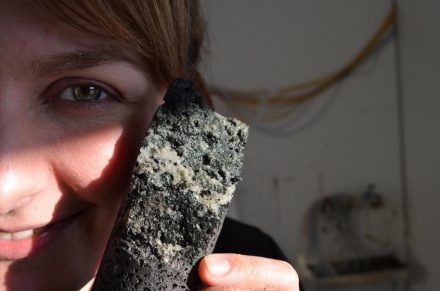 Scientists from Iceland and others make the climate gas precipitate into basalt within only two years, not over geological timescales

Scientists and engineers working at a major power plant in Iceland have shown for the first time that carbon dioxide emissions can be pumped into the earth and changed chemically to a solid within months – radically faster than anyone had predicted.

The Hellisheidi power plant is the world’s largest geothermal facility; it and a companion plant provide the energy for Iceland’s capital, Reykjavik, plus power for industry, by pumping up volcanically heated water to run turbines. But the process is not completely clean; it also brings up volcanic gases, including carbon dioxide and nasty-smelling hydrogen sulfide.

Under a pilot project called Carbfix, started in 2012, the plant began mixing the gases with the water pumped from below and reinjecting the solution into the volcanic basalt below.

In nature, when basalt is exposed to carbon dioxide and water, a series of natural chemical reactions takes place, and the carbon precipitates out into a whitish, chalky mineral. But no one knew how fast this might happen if the process were harnessed for carbon storage.

Previous studies have estimated that in most rocks, it would take hundreds or even thousands of years. Yet in the basalt below Hellisheidi, 95 percent of the injected carbon was solidified within less than two years.

„This means that we can pump down large amounts of CO2 and store it in a very safe way over a very short period of time,” said study coauthor Martin Stute, a hydrologist at Columbia University’s Lamont-Doherty Earth Observatory. „In the future, we could think of using this for power plants in places where there’s a lot of basalt – and there are many such places.“

Basically all the world’s seafloors are made of the porous, blackish rock, as are about 10 percent of continental rocks. 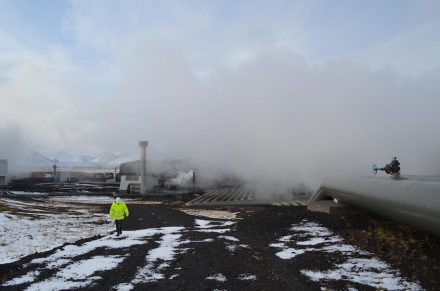