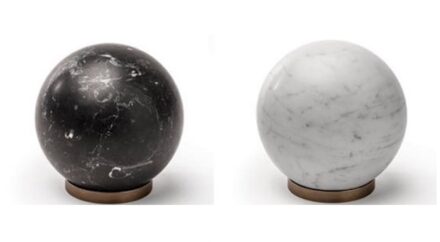 Italian Salvatori Company has a large collection of so-called „Home Accessoires”, items made of stone which have a household function and also serve for decoration. An example is the paperweight „Gravity – a marble mantra”, made of Bianco Carrara or Nero Marquina marble. The diameter is 10 cm, the weight is about 1.5 kg, and it stands on a metal ring.

Muubs is a Danish company that has small items for everyday usage made with sandstone and marble (1, 2).

How can Asian cities cope with the rising demand for gravesites? A report in Archdaily discusses the situation in Singapore and Hongkong.

Fischer & Fischer has hi-end loudspeakers with bodies made of natural slate.

The Minister for Industries of Pakistan‘s southwest Balochistan province announced that the provincial government has named three major districts as “marble cities” to attract foreign and local investments in quarrying and processing the stone.

Celeste Roberge, once a stone sculptor from the US, has now seaweed as her preferred material. An exhibition together with Marjorie Moore and Ronald Leax is on show at the George Marshall Store Gallery in historic York, Maine (1, 2).

Mount Everest draws more than 500 climbers each spring to attempt the summit during a small window of favorable conditions. A new study by the University of Washington has found that the success rate has doubled in the last three decades, even though the number of climbers has greatly increased, crowding the narrow route through the dangerous “death zone” near the summit. However, the death rate for climbers has hovered unchanged at around 1% since 1990.

Video of the Month: messages from humanity at the night sky: in south Korea, drones illuminate the night with Corona-messages and more. American Space-X company is deploying groups of satellites for cellphone communication. While they climb to their final position in orbit, they can be seen as so-called “Satellite Trains”. Astronomers warn that these objects might disturb their view into deep space (1, 2, 3).