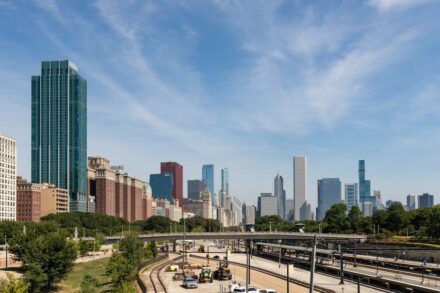 New World Wealth’s market researchers, together with Webster Pacific, have conducted a new study to find out where the rich and super-rich there prefer to live

At least in mathematical terms, the wealth of the population is also high: as of June 2020, every US citizen had a fortune of around US$ 178,000. This put the country in 5th place worldwide after Monaco, Switzerland, Luxembourg, and Australia. However, it must be taken into account here that the gap between rich and poor in the USA is very wide.

These are the current figures published by the market researchers of New World Wealth together with Webster Pacific. The aim of their regular wealth analyses is to determine the economic strength of countries not according to gross national product, but according to the property of their citizens. All of their assets (property, cash, shares, company shares) are included in the calculation, and the respective debts are deducted.

An important topic of investigation for the New World Wealth’s market researchers is also how large the share of rich and super rich people is in the respective country. According to this, there are around 4.7 million millionaires and 690 billionaires in the USA.

The following table shows which are the cities with the richest populations. 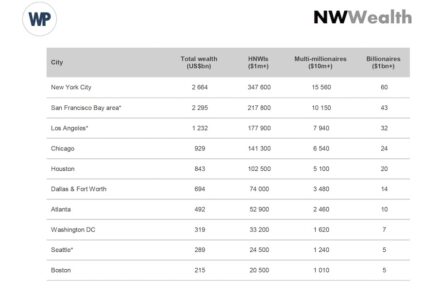 The big cities are especially popular with the rich and super rich, the study found. But many of them have also other residences, for example where there are beautiful beaches or picturesque mountains. The following table shows the most popular 10 such destinations from a total list of 50. 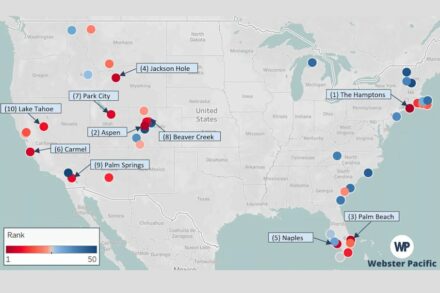 As a result of Corona, these locations may have seen increased presence of their rich part-time residents since the beginning of this year, the study says. Because Covid-19 let the people with a lot of money flee the cities. “For the ultra-wealthy this escape from urban life … has simply meant an extended stay at their vacation homes,” the study says.

All in all, the pandemic has caused the wealth of US citizens to fall by (-)9% in the first half of 2020, according to the market researchers. The reasons cited are:
* declining income levels and job losses;
* the real estate market weakened, especially the market for prime (top-end) real estate;
* declining returns on equities;
* rising household debt.